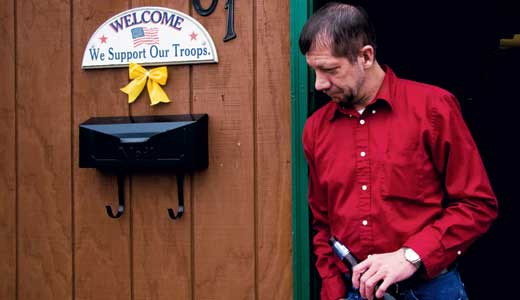 Alison Brown is a stellar model for musicians today — and has been practically from the start of her career. It’s been decades since Brown’s first Opry appearance and her stint as banjo player for bluegrass-pop hit machine Union Station. In the meantime, she’s explored jazz, occasionally switching to guitar, but it’s her forays into bluegrass and Celtic music that shine brightest. The Grammy winner — for a collaboration with Béla Fleck, a somewhat funkier kindred soul — brings her quartet to the Ogle Center on the IUS campus Thursday. Onstage, Brown fuses progressive sounds with sweet traditions; offstage, she’s been a progressive force in a conservative industry. Early on, she took advantage of her experience from a day job in finance to lay a solid foundation for her own label. Years later, Compass Records is still finding and fostering Americana-with-something-extra talent. —T.E. Lyons

Remember that time you tried to run your career and marriage and household with the intensity and precision of a Prussian general? And remember how you hired a highly motivated, gregarious assistant to help you get things in order? And how your boss was flying in for an important make-or-break business dinner and everything had to be perfect? And so you gave your assistant carte blanche to change anything that would make your life run more efficiently — and your assistant said that the only thing holding you back was your spouse? And remember how it became the craziest night of your life? Oh, wait, that wasn’t you. It’s actually Bunbury Theatre’s production of “’Til Beth Do Us Part.” For a great night, check out this family friendly, laugh-out-loud comedy. —Laura Morton

Busy week in the Highlands. Busy, busy. For years, Highlands neighborhoods have been celebrating the arrival of fall with a variety of activities, including music, arts and crafts, food and drink, and the occasional strength and endurance challenge. (It’s becoming more like Festivus all the time.) This weekend sees the 16th annual Belknap Fall Festival in the Douglass Loop area, which helps round out the big week. The festival features more than 100 exhibitors and seven musical acts, including Tenrec, Vessel and the Commonwealth. And, of course, an endurance challenge. Admission is free and, as always, it’s family-friendly. The 19th century-themed Farmington Harvest Festival officially wraps up the week on Sunday, Oct. 10, with crafts, games, music and more at the Farmington Historic Plantation, 3033 Bardstown Road. —Kevin Gibson

Hold on now, celebrity stalkers — Johnny Depp isn’t coming to town. Nevertheless, “Sweeney Todd: The Demon Barber of Fleet Street” should be a performance worth catching when it opens Friday at the Alley Theater/Art Sanctuary. A joint production by Renegade Art Productions and the Alley, this production is based on Stephen Sondheim’s Tony Award-winning musical, not the Tim Burton-directed film. The production will feature a cast of 15, with direction by Sharon Murray Harrah and musical direction by David K. Lamb. The musical is based on a fictional murderous barber, introduced in British periodicals in the mid-1800s, who captured his victims via a trap door beneath his barber chair — meaning this should be a lot of fun. Get your popcorn ready. —Kevin Gibson

The TARC bus knows no boundaries. Every day, it navigates the city — street to street, neighborhood to neighborhood, zip code to zip code. That’s why it makes a natural subject for the public art project “Neighbors: Saint Catherine Street” by photographer Rachel Seed, curator Erin Fletcher and designer Keli Allen. Starting this week, nearly 20 TARC buses will feature Seed’s color photos of the people, places and things she shot while spending a day on Saint Catherine Street. The photos will be on display on the buses’ interior panels. A discussion of the project will be held on Saturday at the 930 Center, which is also exhibiting the images. The project “uses often-overlooked Saint Catherine Street as a lens to examine a community-wide need for a place to call home,” says Fletcher. —Sara Havens

We know you were left demoralized by W. Axl Rose’s 14-years-in-the-making folly — the numbing, Botox-riddled Chinese Democracy. The new album from French-pop auteurs Les Debutantes is considerably less absurd, brilliant, no producers were fired over the phone, and it was completed in a fraction of the time (six years, give or take a few months). Centennial is a 100-song, four-disc collection of original music grown in large part at the home of Debs guitarist and former My Morning Jacket keyboard player Danny Cash. At long last, the Debs’ revolving cast lifts the curtain on their staggering century of songs, appropriately enough on 10/10/10. So expansive, the release practically begs for a new top 100 singles chart, because all 100 would be theirs. —Mat Herron

Children of Louisville: Why have you failed to inform me that you have your own cool show on Nick Jr., of all places, that is badass enough to have featured appearances from the likes of Biz Markie, Jack Black, MGMT and The Roots? I don’t understand why none of you would tell me, really. The show was started by the singer from the Aquabats (remember them?), a band triple-dipped in pure gooey ska happiness. Seems like a logical transition to me. The show features both animated sketches and skits that involve bizarre fuzzy puppets (DJ Lance Rock, Foofa) who sing stoned-out songs about things like having food parties in their bellies. This show may be aimed at children, but you know the audience they’re really out for: the hip adult. So indulge them. Take your kid or your favorite non-addictive illegal substance (or not — no pressure) and check out this color-splashed piece of furry delight. —Pawl Schwartz

Arianna Huffington has adapted like no one else — since moving out of the esoteric precincts of political and cultural discussion in the early ’90s, she’s become a sought-after voice on national issues. From her current perch atop her online political magazine, The Huffington Post, she’s overseen or personally delivered astute commentary, wry observation and some dazzling scoops. Her views on some of the most important matters of the day are compiled in her new book “Third World America: How Our Politicians are Abandoning the Middle Class and Betraying the American Dream.” One of her chief lieutenants in the blogosphere, Howard Fineman, began his distinguished journalism career with The Courier-Journal, and he’s joining Huffington for an evening at the Bomhard Theater. This Kentucky Author Forum event features a wine-and-cheese reception and a broadcast interview with C-J editor Keith Runyon, followed by dinner with the participants. —T.E. Lyons

The list of people who can say they’ve appeared on NBC’s “Last Comic Standing” is getting pretty long after eight years on the air — but the list of people who can claim they’ve won “Last Comic Standing” is still small. Felipe Esparza is the newest addition to that esteemed list, having won the most recent season of the hit reality show this year. Born in East L.A., Esparza was raised in a poor household and started doing stand-up at open-mic nights in the mid-’90s at L.A. clubs like The Laugh Factory. After years on the road, and years of being pigeonholed as an “ethnic comic,” he now finds himself a universal draw all over the country, and recently released an album called Rebound Material that is currently in iTunes Top 100 Comedy Albums. Esparza will be doing an exclusive one-night-only appearance at The Improv. For a complete interview with Esparza, go to www.leoweekly.com. —Brent Owen

U of L Belknap Campus

Louisvillians can be pretty provincial, giving directions based on long-departed landmarks and assuming everyone knows where you went to high school. “Discover Louisville” opens the city’s independent businesses to a university that often blends into the urban landscape, using a college for the express purpose for which it was intended: staging a killer rock concert. To date, OK Go’s video for “Here It Goes Again” has been viewed 52 million times on YouTube, but it’s the Chicago group’s appearance in a video defending the Clean Air Act (with Forecastle headliners The Flaming Lips and Alec Baldwin, among others) that’s earning real credibility points. Company of Thieves and Summer Darling open. —Mat Herron

‘You Have Been Tromped!’

It’s nowhere near April Fool’s Day, but that doesn’t stop artists from trying to fool you. Trompe l’oeil is that time-honored technique of fooling the eye by making one object look like another. One of the best “trompers” in town is Tom Pfannerstill. His street trash looks real enough that you may want to clean up the gallery — that is until someone screams at you that it’s art. Others in the show are Catherine Bryant, Caroline Waite, Frank Weisberg and gallery/studio owner Christy Zurkuhlen, who did an homage to Pfannerstill’s art by making vintage bottle cap jewelry.

Zurkuhlen has also included work by the late Mary Louise Schrodt. “(She) was my first painting teacher and inspired in me a life-long interest in trompe l’oeil painting,” she says. —Jo Anne Triplett

Do you know that three items equal a collection? So if you have three treasured portraits of Elvis on black velvet, you are a certified collector of Elvis memorabilia. Artist Amy Pender has become fascinated with the weird stuff we humans collect. So she decided to see what a collection of collected stuff collected would look like in glass. “I strive to invite the viewer into my work,” she says. “Each piece is detailed and layered to create a depth beyond the initial viewing. My intent is for my audience to be drawn into my work by an initial emotion and then compelled to question what is really happening with each scene I have created.”

Let the collecting begin, but this time in glass. —Jo Anne Triplett