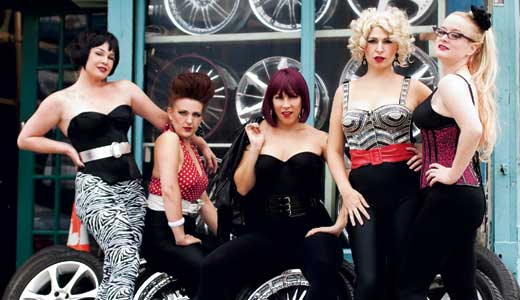 In Ga, a language spoken in Ghana, the word “nokoko” means “something, something.” It’s the word the Kusun Ensemble uses to describe the style of music they’ve developed from fusing traditional African rhythms with modern jazz, and using traditional Ghanian instruments with bass and guitar. Founded by Nii Tettey Tetteh, a Southern Ghanian Kashaka player and internationally acclaimed educator and composer, the Kusun Ensemble is made up of musicians and dancers that include past and present members of The National Ballet and The Pan African Orchestra. It’s a whole lot of something-something all at once, known worldwide to “electrify” audiences with their music, which is second nature in Africa, and with their lively dancing. YouTube them if you don’t believe me. —Jane Mattingly

Action figures were such a large part of my childhood that I still care about them — the catalyst for many a collector type personality later on in life (we have action figures and comics to thank for RPG players, card collectors and all manner of music lovers). Jonathan Mathews is an artist who is a step in the action figure process: The guy that sculpts superheroes from scratch. Best job in the world, right? He does not do many public events, so Ultra Pop is lucky to have him. The fact that he works for DC Comics means that you get to see original prototype designs in resin and wax of the likes of Batman, Superman, Street Fighter characters and the guys from “Clerks.” The show is free, but don’t forget to bring money, because action figures and other sculpted paraphernalia will be available at this one-night-only event. —Pawl Schwartz

Paint cans, trashcans, tires, plungers, brooms, bins, bags, boots and hubcaps? No, this isn’t an episode of “Hoarders.” It is, however, the most badass percussion that you’ve ever heard in your life, without a single drum or cymbal in sight. The international sensation “Stomp” returns to Louisville courtesy of Broadway Across America with some fresh junk jams. “‘Stomp’ has evolved a great deal ever since its first incarnation at the Edinburgh Festival,” says co-creator Steve McNicholas. “Every reworking has involved losing some pieces and gaining new ones, but has always stayed true to the original premise of the show: to create rhythmic music with instantly recognizable objects, and do it with an eccentric sense of character and humor.” —Jane Mattingly

Is it tomorrow already? According to the Lexington-born Land of Tomorrow (LOT) art organization, it’s so the future that they are opening a second branch in Louisville. Land of Tomorrow is a gallery, studio space and shop. The Lexington LOT has been in existence for a little more than 18 months — enough time for the founders to know what ideas can transplant from one city to the next.

LOT Louisville is opening with a solo exhibition by Mike McKay, featuring his paintings and three-dimensional installations, which fully utilize his background in architecture and design. “Louisville is the Land of Tomorrow,” curated by local artist Joey Yates, focuses on Louisville as a source of inspiration for artists working in various media. —Jo Anne Triplett

When I was a kid, I thought I could earn a living doing lots of things — professional superhero, LEGO constructor, armpit fart-maker — but never did I once realize that my occasional hobby of climbing trees could actually take me somewhere. That said, the Kentucky Arborists Association will unleash professional arborists (a fancy moniker for tree-hugger) on the elms and oaks of Central Park for its annual tree-climbing competition. The winner of the day’s six challenges will go on to represent the commonwealth at the International Tree Climbing Championship, which I assume is kind of like “Mortal Kombat” but with, you know, trees and shit. Events are held throughout the day, including a kid’s climb at 10, so get there early. —Jonathan Meador

Oh Little Fire is the first album in five years for the three-time Juno Award nominee and onetime singer of Kingston, Ontario, troupe Weeping Tile. Following that band’s break-up in 1998, Harmer recorded a set of standards for her father as a Christmas gift. Her family convinced her to release it as 1999’s Songs For Clem. What began with relative prodding has transformed into a pop career driven by Harmer’s wise observations. After years as background utilitarian on Neko Case’s Middle Cyclone, as well as for Great Lake Swimmers and The Weakerthans, and seeing Feist cover “Open Window,” Harmer’s presence on America’s broad stage seems to have arrived. —Mat Herron

No Kill Louisville is all about finding homes for adoptable pets — the organization believes every adoptable animal should have a right to finding its home rather than being subjected to euthanasia-by-numbers. In that spirit, NKL has organized the Million Mutt March, a full-fledged rally and march set for Sunday morning in Cherokee Park. Registration cost to participate is just $5, all animal lovers are invited, and dog owners are encouraged to bring their four-legged friend along as well (pretty important, considering it’s a mutt march). The Derby City Disc Dogs will give a free performance after the march, and there will be adoptable animals available from local animal welfare agencies as well as food, drinks and other pet-friendly vendors. Just be sure you wear comfortable shoes and watch where you step. —Kevin Gibson

For the 1.4 million Americans who suffer from the digestive disorder Crohn’s Disease, it feels a little like this, according to LEO freelancer Kevin Gibson, who wrote about his condition in June: “The pains that pierced my gut were like nothing I’d ever felt; each time it hit me, it was nearly enough to double me over. It literally felt like a stab wound, and it happened every hour some days.”

“Love Your Guts” is a family-friendly benefit for the Crohn’s & Colitis Foundation Sunday at Molly Malone’s in St. Matthews. The inaugural event will feature music by King Jacob and The Uncommon Houseflies (featuring Gibson). The $5 cover will enter you in a grand-prize raffle, and a silent auction featuring CDs to liquor swag is also planned. —Sara Havens

‘State of Justice in Louisville’

For the most part, the response to homicide in Louisville’s black communities has been a woeful mixture of prayer vigils, airbrushed T-shirts and canned remarks from community activists. There are plenty of armchair sociologists around the city, but very little public analysis has been conducted to approach the systemic problem. That’s why in 2007, U of L professor and LEO columnist Ricky L. Jones established the Center for the Study of Crime and Justice in Black Communities, in order to develop and support research projects that will examine the multifaceted causes and issues involving crime, justice and punishment. The organization will host its first event and premiere a documentary entitled “Justice for All” by local filmmaker Stephen “John Doe” Barbour on Monday. The film features commentary from legal scholars and members of community on the local causes of crime — from education to unemployment. A discussion follows. —Phillip M. Bailey

Tuesday night just got a bit more interesting. The New York City burlesque troupe Dangerous Curves Ahead is stopping through town at the Alley Theater for a show that promises glitz, glamour and more tassels than you can shake your stick at. They’re on a three-week, 19-city tour that includes many shows in the South. “We had a lot of fun in the South on our last tour,” says Clams Casino. “The Southern audience is always ready for a good time.” So what can you expect to see and hear Tuesday night? “A cutting edge and raucous burlesque show with NYC flavor,” Clams adds. “We’ve got acts paying tribute to everything from Led Zeppelin to ‘Pulp Fiction’ to Kiss to ‘Star Wars’ to Motley Crue.” —Sara Havens

Douglas Miller was recently named Best Visual Artist in the LEO Weekly’s Readers’ Choice issue. This staffpick should extend that 15 minutes of fame to at least November. After the accolades must come the talent. This exhibition shows he’s “got it,” featuring his drawings from “The Nose” by Nicolai Gogol.

It’s a story of a nose on its own, living a life separate from its owner’s. It starts mysteriously, then reattaches after its adventure. Gogol doesn’t explain why, except to throw in a little witchcraft. Others cite castration, of course.

“Just as ‘The Nose’ is an inexplicable meta-narrative,” says Miller, “(My) drawings may be viewed with a myriad of explanations. (My) animal and figurative drawings from this series are simple yet acutely descriptive, and encourage the viewer to actively engage the artwork.” —Jo Anne Triplett