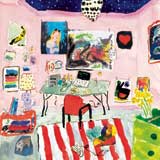 That she’s characterized, accurately, as a feminine shredder in a scene waterlogged with male guitarists might’ve served as an initial distinguishing factor, but it won’t be the reason Marnie Stern sticks around. To be sure, her skills have helped to solidify her as an indie rock heroine despite the fact that, let’s be honest, women have held their own on the fretboards for years. It’s this kind of affirmative action play that threatens to detract from her art, hence Stern’s point of sarcasm in “Female Guitar Players Are The New Black.” The New Yorker’s third long-player rides at mach 10, bristling with raw confidence thanks to Stern’s mercurial fingerstyle and drumbeats seemingly induced by shock therapy. She hasn’t lost her ragged charm (“Build Her Confidence”) on her way to the arena (“Cinco De Mayo”), and gives notice to discriminating indie audiences everywhere that for once, knowing your scales isn’t a character flaw.