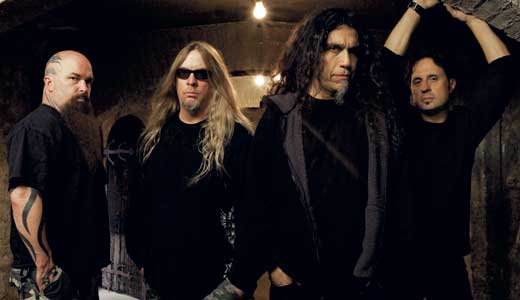 Unless you’re attending one of those “An Evening With …” shows, a rock concert usually involves sitting through at least one opening band. And if you’re a metal fan in Louisville in 2010, it might mean sitting through three, four or even five opening bands before the headliner hits the stage.

New York groove
“We’re looking forward to this tour. It’s like a class reunion,” says Ian, referring to the “Clash of the Titans” tour, which stopped at Louisville Gardens on June 12, 1991.

It’s a reunion for Anthrax as well, as they once again welcome singer Joey Belladonna, who fronted the “classic” Anthrax line-up. “It’s great to have Joey back,” Ian says. “It’s working out really well.”

New York-based Anthrax has the distinction of being the only “Big Four” band not from California. “We were influenced by a lot of the same bands the other guys were, obviously, but we still were kind of out here on our own. And they all have sort of incestuous, intertwined histories with each other. And we have a more, I don’t know, street vibe, with the rap and punk influences. But, you know, we’re all still metal bands.”

Decades of aggression
As if a bill featuring three-quarters of the Big Four weren’t enough, the set lists are pretty special, too. Megadeth will perform Rust In Peace in its entirety; Slayer will be giving Seasons in the Abyss the same treatment. Both records were released in the fall of 1990, Rust on Sept. 24, Seasons on Oct. 9. When Slayer performs the album in Louisville, it will be three days after the disc’s 20-year anniversary.

Take no prisoners
Megadeth has seen quite a few membership changes; frontman Dave Mustaine has been the only constant. For Ellefson, who rejoined Megadeth in 2010 after the band broke up in 2002 (Megadeth reformed in 2004 without him), the Rust in Peace shows are a logical way to return, allowing the band to showcase both its history and its career peak.

“We have what you could call the ‘greatest hits’ portion of the set, but the highlight will be Rust in Peace, which we’re playing top to bottom,” Ellefson says. “It’s a challenge to play those songs, because I’m like a lot of our fans, and I want to hear the songs exactly the way they were recorded. And (Rust) is very musically progressive and complex. There are some tracks on there that we had never played live before, like ‘Five Magics’ and ‘Poison Was the Cure.’ But then there are some tracks, like ‘Tornado of Souls,’ that are pretty deep album cuts, but for whatever reason, the fans just go nuts every time we do it.”

Another challenge: Playing before Slayer goes on.

Blood red
For many, Slayer is the alpha and omega of American metal, and is renowned for its power, chops and precision. Make no mistake: All the bands on this bill feature gifted musicians. But Slayer were always just a little faster, a little uglier, a little more intense.

One key ingredient to their sound is Lombardo’s mastery of metal’s double-bass drum technique, which is like sprinting in place for four or five minutes at a time. Try air-drumming along to “War Ensemble” or “Angel of Death” and see if your heart rate doesn’t go up.

“It’s pretty physically intense,” Lombardo admits. “I’m 45, and I try to stay in shape. I try to eat healthy. It’s not easy playing the way we do, and the way that I do, but it’s what the music demands, and I love it.”

To wit: performing their classic Seasons in the Abyss.

“We did the Reign in Blood shows a few years ago, and when we knew we were doing this tour, we talked about doing something along those lines, and the 20th anniversary of Seasons was coming up, so we decided on that,” he says. “They’re great songs.”

On the “Clash of the Titans” tour, headliner status alternated from show to show. On this tour, which is officially the Jagermeister Music Tour, the lineup is Anthrax, then Megadeth, then Slayer. There’s a simple reason for this, Lombardo says. “Nobody wants to follow us.”