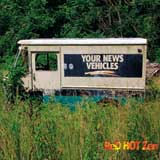 Scott Mertz still sports the big hat that makes you dare him to earn center stage, but the new crew around him seems slightly less crazy than Cornbread Mafia. Southside Freddy is offering new additions to his dialect of dry-rub guitar leads (all the goodness of greasier styles but with more flavor), as heard in his earlier work with Bodeco. The debut disc for this oddly named quintet starts with quasi-locked riffing, so we’re all informed that they could go AC/DC at will, but then early tracks chug along in a zone where Skynyrd’s backing Mellencamp. Wait, though, as it almost seems there’s a completely new band once they begin expanding on song-lengths and listeners’ horizons, as in the extended statement of purpose “You Wish” and the guitar showcase “Family Tree.” A rambling elegy makes the most of distaff vocalist Christy O., leading to a West Virginia-goading novelty song, and then an apocalyptic blues in which way-solid drummer Jyn Yates trades her rolling fills for the ol’ hammer-and-tongs. This act could be especially dangerous live.