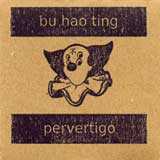 Bu Hao Ting puts one foot in the same post-rock time zone inhabited by Yank Crime-era Drive Like Jehu and the other in the crust-punk ephemera of Richmond-via-New York band Born Against. Frenetic drums, scattershot time signatures and raking, furious atonal guitars act as sonic uppercuts. It’s not for everyone. “The Clown Particle Experiment” condenses a freeform sludge bass waltz, marching band snare breaks and noisecore in under four minutes, and if that doesn’t blow your hair back, the brutal “Latent Bullfight” recalls Jesus Lizard, and “Organs 2.0” walks down a trail Rorschach hacked away at years ago with a machete. Truthfully, pinning down styles on Pervertigo is a fool’s errand, because no one method lasts. These are 21st century schizoid men who relish weirdness, and they would prefer to keep it that way.