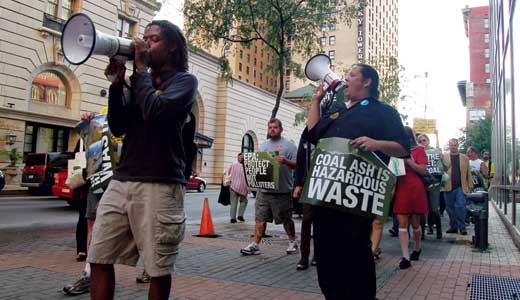 Walter Powers stood before a panel of Environment Protection Agency representatives and a crowd of hundreds at the Seelbach. Gripping the sides of a wooden lectern, Powers drew a faint, almost wheezing breath. His voice, shaky but steady, resonated throughout the hanger-sized conference room.

“I work at an active landfill that did accept coal ash until a couple of months ago,” said the Evansville, Ind., resident who works for Allied Waste. “We were accepting coal ash … to the tune of 200-plus pounds a day.”

Last week’s EPA hearing — the seventh of eight such hearings held nationwide — witnessed about 400 testimonies over 11 hours. In addition to Powers, hundreds of pro-coal industry types, environmental activists, health specialists and regular citizens weighed in on new regulations proposed for the byproducts of coal, chief among them coal or “fly” ash, which is stored in 44 aboveground impoundment sites across Kentucky. The state is home to seven such sites that the EPA has dubbed “high hazard.”

For nearly 20 years, Powers operated a mobile compactor (“the sucker is huge”), moving and organizing hundreds of tons of solid waste every day. For most of those years, he dealt with coal ash, a byproduct of coal combustion power plants. A growing body of scientific evidence suggests it is toxic to living tissue and is the subject of new, and potentially stringent, regulations the EPA proposed per the 1976 Resource Recovery & Conservation Act.

“I started getting sick a couple of years ago,” Powers said. Doctors measured the arsenic level in his blood, and it was off the charts. Arsenic is one of many toxic heavy metals in coal ash. Others include mercury, cadmium, thallium and lead.

“My hands go numb all the time,” he said. “My bladder is not getting any better (due to incontinence). Whenever I have a bowel movement, I have to keep wiping, because it keeps leaking. This is from long-term exposure.”

A few hours before Powers spoke, a pro-coal rally was attended by a handful of state politicians, who humped the industry for its job-creating properties at nearby Jefferson Square Park: Sen. Brandon Smith, R-Hazard, chair of the Senate Natural Resources and Energy Committee; House Democratic Floor Leader Rocky Adkins of Sandy Hook; Jim Gooch, D-Providence and chair of the House Natural Resources Committee; and Rep. Leslie Combs, D-Pikeville, according to The Courier-Journal.

In response to the Frankfort-sanctioned shilling, two Greenpeace activists rappelled down the side of the Seelbach and unfurled a banner: “Protect people, not polluters.” The activists, who were drawing attention to the toxicity of living in close proximity to coal ash impoundments, were arrested and charged with criminal trespassing.

These sites, or ponds, are usually found in depopulated rural areas or near low-income neighborhoods. Riverside Gardens, for example, is located a quarter mile from LG&E’s Cane Run coal-fired power plant and ash pond in southwest Louisville. This fact wasn’t lost on Greg Wagner, who equated their danger with their location.

“It’s not rocket science. You’d never see these things in Anchorage or in the nicer parts of Lexington,” Wagner told the EPA. “The only difference is that those people are wealthy, and the ones who are forced to live near them aren’t.”

Commenters were sharply divided into two categories, with no observable middle ground: those who wish to keep the current system of optional, state-directed regulation intact and thereby preserve the multibillion-dollar coal combustion byproduct industry, and those who see coal ash as a hazardous material and want it regulated as such, because of its negative affect on human health and the environment. Declaring coal ash a hazardous material would effectively eliminate the multibillion-dollar industry that is lobbying the EPA to leave coal ash regulation to the states.

“We’re pretty sensitive to the issue, mainly because it would damage the recycling business,” said Danny Gray, executive vice president of Charah Inc., a company that turns coal combustion byproduct into profitable products like PriceLite, a cheap concrete aggregate used in construction. Gray doesn’t think coal ash is toxic. Asked if he could account for the discrepancy between his science and the science of those in favor of more stringent regulation, he said that the “opposition has focused on evidence that furthers their own cause. In our opinion, states have demonstrated they can already enforce the solid waste laws,” Gray said, “and so new regulations would be redundant and harmful to the economy.”

Gray also said coal byproduct is “among the greenest technology available,” but acknowledged that to make PriceLite, you have to burn coal, a hydrocarbon, which the EPA calls a major contributor to climate change.

Much of the hearing’s morning and afternoon portions were dominated by rhetoric like Gray’s: “The most successful recycling program in American history” was a phrase used dozens of times by representatives of coal byproduct industry, who argued that new regulations would hurt/destroy/cripple the economy. Other proponents of less regulation often said they weren’t aware of scientific evidence suggesting that coal ash is harmful to people, despite testimony from people like Walter Powers.

By 5 p.m., more and more comments came from those in favor of greater regulation, as if those busy attending school and non-coal-related day jobs were finally able to attend the hearing en masse.

Around this time, about 200 people swarmed Cathedral of the Assumption’s Fountain Park to call for greater regulation. Sponsored by Kentuckians for the Commonwealth, the Sierra Club and Kentucky Interfaith Power & Light in favor, the rally featured musicians Daniel Martin Moore and My Morning Jacket singer and guitarist Jim James, whose performance preceded the crowd’s march to E-On’s U.S. headquarters on Main Street. Marchers bared signs and bullhorns, drawing at least one middle finger from an angry rush-hour motorist who wasn’t identified as a member of the Kentucky legislature.

Author Wendell Berry, who spoke at the rally and marched, said, “The biggest mistake our side has made in this debate is for allowing that construction (of jobs versus the environment) to be put on us. People have got to matter, too, more than money.

“And we’re not against jobs, either” Berry said. “In fact, the jobs that will drive Kentucky’s post-coal future will depend on the health of the mountains in places like Eastern Kentucky. Our entire quarrel is with the coal companies who want to destroy these beautiful ecosystems and the lives of those who live within them.”

But for Powers, the damage has already been done.

“I’ve been poisoned by something from where I work,” he concluded in his soft-spoken testimony. “And for these people to have the audacity to say it doesn’t hurt anyone? Come on. We need your help. You guys really need to look into this, because we need help. I need your help. Thank you.”

And the crowd — largely pro-coal at the time— erupted into applause.