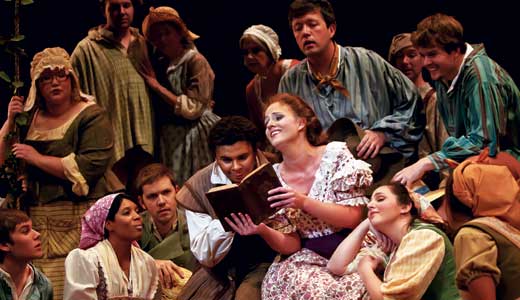 After opening its season in September with a pair of tragic Italian operas that end with blood on the stage, the Kentucky Opera this week turns back a half a 19th century for “The Elixir of Love,” a light-hearted romantic comedy that skips along through two acts to a happy ending.

And while the Gaetano Donizetti opera is played as much for romance as comedy, it won’t hurt if the audience finds itself smiling along the way, says Louisville native Emily Albrink, who makes her Kentucky Opera debut Friday and Sunday at the Brown Theatre, singing the lead role of Adina.

“We’ll see what happens,” Albrink laughs. “But Donizetti makes comedy easy, because so much of it is written into the music, and into the timing. Comedy is all about timing, and it’s so much easier if it’s already in the score. Plus, the other actors are just so funny.”

The so-called “elixir of love” is an earlier-day Love Potion No. 9 that’s sold by a traveling quack doctor to a country bumpkin who is tired of being snubbed by the girls. The bumpkin, Nemorino, sung by tenor Victor Ryan Robertson, becomes locked in an old-fashioned two-guys, one girl dilemma with the handsome and self-assured military man Sgt. Belcore, sung by baritone Chad Sloan.

But it turns out Adina isn’t just your regular, fantastically beautiful-but-air-headed love quest. Yes, she’s the prettiest girl in town, and the richest, and the first to say hello to a new guy before she’s said goodbye to the last. But she also suspects she might be missing something.

“Adina is young and beautiful and likes to be in control,” says Albrink, 28. “But she hasn’t allowed herself to know what it is to be in love. That changes for her over the arc of the story.”

What makes all this so appealing for audiences is the bel canto style of composer Gaetano Donizetti, who held the Italian operatic stage between Rossini and Verdi, before Wagner brought massive orchestration to opera.

Before a studio audience at Classical 90.5 WUOL’s “Lunch and Listen” series, Mechavich explained that composers like Donizetti began with the words of the libretto, then moved to the music.

“Donizetti would sit down and speak the text,” says Mechavich. “He would find the groove of the melody so the honesty and intent of words came across. Then, he would add the tune. So when you hear the slow cavatinas in ‘Elixir,’ the words are the most important things. And the colorings of the words.”

Donizetti is renowned for blending the singers’ voices so that even when they sing in ensemble, the individuals they portray remain in character. Albrink says that adds to the comedy and romance.

“Adina is always singing these fast and bubbly flourishes,” says Albrink, and, to demonstrate, she flits up a scale, “da-da, da-da, da-DA!” Sgt. Belcore is the dignified baritone: “Da-dum.” Dulcamara (Peter Strummer), the love potion quack, is always the rapid-talking con man: “da-da-da-da-da-da-da-da.”

And Nemorino? Oh he’s just hopelessly caught up in lyrical beauty, pining away for Adina.

Growing up, Albrink studied singing with her mother, Nancy Albrink, at Louisville’s Academy of Music at St. Francis, and became a protégé of University of Louisville soprano Edith Davis Tidwell. But she also acted with Walden Theatre and went off to the University of Michigan with the notion of combining acting and singing in Broadway-style musical theater. But at the Manhattan School of Music in New York, she switched to opera and got her first break at the Tanglewood Music Festival where she sang Mozart under the baton of Boston Symphony conductor James Levine.

“I had this preconceived notion that opera was inaccessible and boring — a lot of people in costumes singing at you,” she says. “But I came to see it was far more than ‘park and bark.’ I realized that in opera, I could combine my two loves — singing and acting.

“Then,” she says, “I was thrown into this role of Despina in ‘Cosi Fan Tutti’ with James Levine conducting! I’d never sung in Italian, and I’d never sung Mozart. It was just an incredible experience.”

Back in New York, Albrink became friends with international recording star Dawn Upshaw — and all that swirled into an operatic career, which she brings home to Louisville this week.