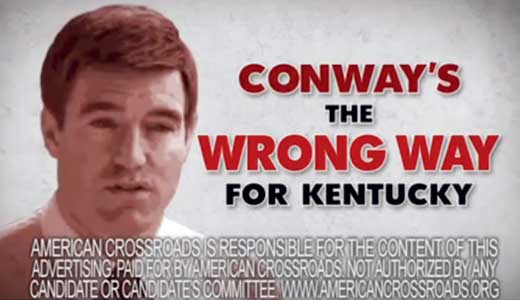 An ad paid for by American Crossroads GPS criticizes Democratic Attorney General Jack Conway, who is running for a seat in the U.S. Senate against Republican opponent Rand Paul.

More than 40 years ago, Roger Ailes saw the future of American elections. “Television is no gimmick,” the future Fox News president said, “and nobody will ever be elected to major office again without presenting themselves well on it.”

These prescient words tumbled from Ailes’ lips during his employment as media sorcerer for Richard Nixon’s 1968 presidential campaign, which benefited handsomely from a groundbreaking use of focus groups, manipulation of fact and mock-news panel staging. The campaign was chronicled beautifully in the book “The Selling of the President, 1968,” whose cover features Nixon’s mug adorning a pack of cigarettes.

In the wake of this year’s Supreme Court ruling on Citizens United v. Federal Election Commission, Ailes’ commercially approved maxim now applies to corporations as well as candidates and their supporters. That’s because the 5-4 decision allows corporations to spend unlimited amounts of cash on political ads via so-called 527 and 501(c)(4) groups. These organizations are essentially tax-exempt fronts for donors who, per the implications of the ruling and IRS statutes, do not have to disclose their identity until the next year’s tax filings are due, long after the current election cycle is over.

President Barack Obama and his 2008 opponent, Arizona Republican Sen. John McCain — who co-authored the McCain-Feingold Bipartisan Campaign Reform Act of 2002 that the Citizens United ruling effectively neuters — denounced the conservative-leaning Supreme Court’s ruling shortly after it was handed down.

“There’s going to be, over time, a backlash when you see the amounts of union and corporate money that’s going to go into political campaigns,” McCain told The Washington Post in January.

When the FEC concluded in June that Citizens United, a conservative nonprofit that produced propaganda about former presidential candidate Hillary Clinton during the 2008 Democratic primary, was exempt from having to identify donors in any political ad broadcast on radio, satellite cable or the Internet, floodgates opened for other politically minded nonprofits to follow suit.

So far this year, political action committees have spent $277,769,000 on campaigns alone, exceeding smaller per capita donations (although not by proportion). But because the ruling is new, voters won’t know who’s paid for what ads until after they’ve cast their ballots.

The most notorious documented consequence in this new age of unfettered political spending involved Target Corporation’s donation of $150,000 to Minnesota Forward, a conservative PAC that supported Tom Emmer, a gubernatorial candidate who openly advocated violence against homosexuals, whom he referred to as pedophiles.

U.S. Third District Rep. John Yarmuth, D-Ky., introduced a House resolution earlier this year condemning the Citizens United ruling, which he called “disastrous for our democracy.” He has co-sponsored the DISCLOSE Act, introduced by Rep. Christopher Van Hollen, D-Md., which would amend the Federal Election Campaign Act of 1971 to “prohibit foreign influence in Federal elections, to prohibit government contractors from making expenditures with respect to such elections, and to establish additional disclosure requirements with respect to spending in such elections, and for other purposes.”

In a statement, Yarmuth said, “Now, the Supreme Court has opened up the floodgates to even more corrupting money. I wonder how long it will be until we have ‘the Senator from Goldman Sachs’ or ‘the Congresswoman from Pfizer.’”

Or, for that matter, the Congressman from Massey Energy: In a rallying letter to fellow coal companies uncovered by the Lexington Herald-Leader, International Coal Group senior vice president and general counsel Roger Nicholson wrote, “We are in a position to be able to take corporate positions that were not previously available in allowing our voices to be heard.

“A number of coal industry representatives recently have been considering developing a 527 entity with the purpose of attempting to defeat anti-coal incumbents in select races, as well as elect pro-coal candidates running for certain open seats,” the letter continued. “We’re requesting your consideration as to whether your company would be willing to meet to discuss a significant commitment to such an effort.” As of press time, the multi-coal company PAC has yet to surface, at least until next year, and a call placed to ICG was not returned.

American Crossroads GPS, a PAC run by former Bush administration advisers Ed Gillespie and Karl Rove that has given 100 percent of its $9,135,834 to Republican candidates in this cycle, ran an ad that falsely implied Conway’s support for utility rate increases. According to The Courier-Journal, Conway opposed rate increases from the outset of the hearing process.

In addition to fundraising support and ads produced by Freedomworks PAC (another Rove-ian joint), Paul received donations from Sarah Palin’s Sarah PAC, the Club for Growth, the imaginatively titled CoalPAC and Citizens United.

Paul also received the endorsement from the nation’s largest corporate lobbying group, the U.S. Chamber of Commerce. The chamber spent nearly $150 million in 2009, a record-breaking 10-year high. It would be targeted by the DISCLOSE Act in the wake of recent reports that it has accepted political contributions from the board members of foreign corporations, and in the process, stuck a middle finger in the eye of American campaign finance law.

In a recent interview on WFPL’s “State of Affairs,” Republican Todd Lally, Yarmuth’s opponent who has been endorsed by the Chamber of Commerce, called the Citizens United ruling “another way for the government to stifle free speech,” and denied the implication that it could allow foreign money to influence American political campaigns.

Given the ruling’s broad nature, the door swings both ways and across party lines. According to Politico, Conway and other Democrats will receive support from Americans for Working Families, a 527 that plans to run ads against Republicans this fall. AFWF has yet to disclose any donor information to the FEC.

But so far, the slant is decidedly Republican. According to the Center for Responsive Politics, American Crossroads offshoot Crossroads GPS, a Washington-based 501(c)(4), spent $1.9 million to target Democrats in three contested national races, including Conway’s. As of last week, watchdog groups have asked the Internal Revenue Service to investigate whether Crossroads is violating federal tax law.

Ironically, the money trail of advertising idiocy and faceless Washingtonian corporate backers comes full circle to a horse farm outside Lexington, owned by the largest single donor to Crossroads GPS: B. Wayne Hughes. Hughes, who founded Public Storage Inc., has a net worth of $3.9 billion and has been one of the nation’s top contributors to the Republican Party, donating more than $1.5 million this year.

So, in a sense, Ailes was right, with one caveat: No one will get elected without presenting themselves well on television — unless they spend a billion dollars to have an ad created for them.