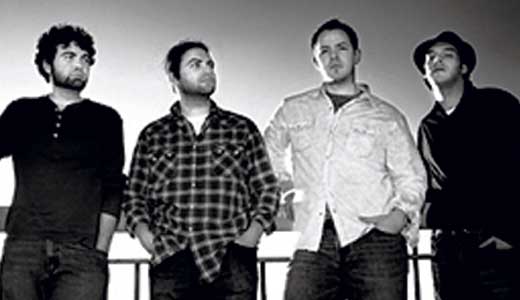 Thirty Spokes appears on this week’s LEO Music ’Cast to talk about their latest, ‘Muses & Excuses.’

Last month, Dustin Arbuckle realized a dream: His group, Moreland & Arbuckle, opened for ZZ Top at New York’s Beacon Theatre. “We couldn’t ask for things to be too much better,” the blues harp player says. Buddy Guy, Los Lobos and Robert Cray are a few other titans M&A has shared stages with. They also recently performed on a USO tour.

“We were runnin’ on maybe four or five hours of sleep a night. Every morning it was get up and put on your body armor and helmet,” he says. “One thing we heard over and over is, ‘You made me forget I was here for a couple hours.’ That helps you know how much of what you’re doing over there means to them. Regardless of how you feel about the war, you’ve still got guys who are stuck halfway around the world. They need entertainment as much as anybody.”

Arbuckle rode in an Osprey, arguably the military’s most dangerous aircraft. “One of the soldiers told me, ‘Civilians don’t usually ride these. There are guys in the military that don’t ever get to ride in these.’ I’d ride one again. There’s my vote of confidence.”

They perform at the annual Garvin Gate Blues Festival, Oct. 8 and 9 at Garvin Place in Old Louisville, near The Rudyard Kipling. Check out garvingatebluesfestival.com for more info.

Ribbon cutting
Even though he’s scheduled to appear on a Lynyrd Skynyrd tribute album, Shooter Jennings’ “futuristic audio movie album” Black Ribbons isn’t roots rock; it has more in common with the industrial clench of Nine Inch Nails’ The Downward Spiral. That was by design.

“Albums are experiences. I was bored with everything and wanted to stir the pot,” he says. “I knew I was grabbing onto an axis of an idea. I knew it was going to be wild, but it was the time for me to do that.”

He and producer David Cobb came into the studio with little in the way of arrangements, and spent much of their time creating new soundscapes. “Cobb said it best: ‘We went in and made a bunch of good shit and a bunch of bad shit, and we took all the worst shit and made a good record out of it.’”

Pokey tones
Having wowed audiences in Britain and appeared at the Newport Folk Festival, Pokey LaFarge stops by his old stomping grounds with his band, The South City Three, on Saturday, Oct. 9, at Zanzabar (2100 S. Preston St., 635-ZBAR). Also appearing: The Hot Seats and Two Man Gentlemen Band. Showtime is 8 p.m., cost is $10.

Music Cast
Muses & Excuses is the new album from Thirty Spokes (thirtyspokesmusic.com), and we have them in the office this week. They perform Friday, Oct. 8, at Headliners Music Hall. Listen at Bluegrass Catastrophe, bluecat.leoweekly.com.