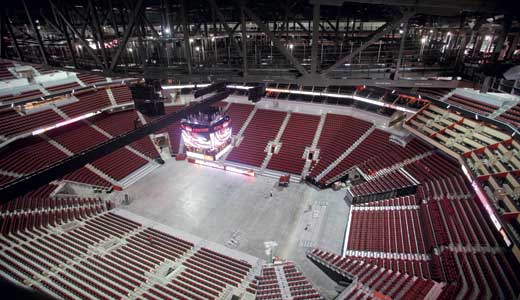 “If you build it, they will come.” —The Voice, “Field of Dreams”

That’s how America got so big. We called it Manifest Destiny a century and a half ago. The country remains mired in that hubristic mindset today.

A nation much younger than now expanded relentlessly and inexorably toward the Pacific. It was our right, we believed. There was divine justification.

Manifest Destiny: “To overspread the continent allotted by Providence for the free development of our yearly multiplying millions.” Journalist John O’Sullivan so branded that vision in the
mid-19th century.

So we stretched our borders, east to west, north to south.

And they did come — the adventurous, the set-upon, immigrants, illegals and indentured — developing a can-do mentality. Nothing was beyond our reach, no dream too grandiose. American swagger evolved.

So we built accommodations bigger and taller and wider, skyscraping the heavens, strafing the countryside.

And, because we are addicted to new and shiny, we tear down and build again.

It is our wont, an imperious ostentation that sets our nation apart.

That is how we remember the quote, of course, though it actually reads, “he will come” — not “they” — in the romanticized cinematic ode to a more pastoral, long-lost America. An homage to the halcyon days of hickory and horsehide, to “Say it ain’t so” Shoeless Joe, swinging his Louisville Slugger.

For the film, producers built a baseball diamond in cornfields outside Dyersville, Iowa. And the ghosts of Joe Jackson and his pals, the type of sporting gladiators nation-states have revered for centuries, came and played. So the fans also came, both in the film and real life, trying to recapture the bucolic.

That quiet ball diamond midst the cornfields is far from our default idea of destination. It is but a quaint counterpoint. We love our sports heroes, their games and the venues where they battle. As constant reaffirmation of O’Sullivan’s proposition, we build ever larger, more commodious stadia to watch them perform.

Jerry Jones, who built a billion-dollar temple to his Dallas Cowboys, is not aberration but paradigm. Hallowed, staid and utilitarian no longer satisfy. We desire — no, crave — neon and luxe palaces for our sports idols to compete, where we can savor their endeavors in splendid comfort.

Thus this monument to a city’s pride was once conceived. Now it is done. Louisville’s Parthenon, its Colosseum, sits grand, glitzy and imposing hard by a bridge and interstate paralleling the Ohio, close to the spot where our burg was founded. A daring endeavor in insecure financial times, its future viability unknown, The Yum! stands as testament to dogged determination.

The city’s fathers, its dreamers, its schemers, its university wanted bigger, mo’ better.

The deal’s been done.

The question now: Will they come?

So far, yes, they have. Fueled by a fawning fervor, tickets — free tickets — have been gobbled up to tour this object of civic pride and fascination. First to come, for a christening, the luminaries who made it happen. Then, corporata, for whom this edifice stands as a confirmation it tops the pyramid of power. Then Cardinal fans, whose loyalty has been tested in extremis. Then John and Jane Q. Public to come and gawk at this palatial experiment in civic responsibility.

The Eagles broke in the place. How appropriate.

Their music is slick, pristine, pretty to a fault. And the band is in it for the Benjamins. It is said the members don’t even talk to each other offstage. Yet $180 tickets were sold with impunity.

Such exaction is all too familiar to Louisville Cardinal basketball fans, whose loyalty has been taxed to the limits to pay for the team’s abdication from Freedom Hall. A season’s seat in the corner, not between the baskets, 30 rows up, runs $101/ game, factoring in the mandatory donation.

When told this, Marc Winston, a New Orleanian married to a Louisvillian, in town for a family visit and to attend The Eagles concert, offered this perspective. “My seats to the NBA New Orleans Hornets are in the fourth row at mid-court. I pay $85 a seat.”

So far, at least. For The Eagles. For the Cardinals inaugural men’s and woman’s basketball seasons.

Other than that, The Courier-Journal, in its special Oct. 10 section on all things arena, reported only 11 other events scheduled through March. So it is certainly legitimate amid all the hoopla to ask how this place is going to meet its debt service. The newspaper reported that Standard & Poor “will consider downgrading the arena bonds to ‘junk’ status as early as next year because of concerns about the TIF (tax increment financing) revenues being available for paying off debt.” There are rumors bond rating agencies might make that move sooner.

But that’s a worry for another day.

For now, the denizens of our city, as well as the community’s movers and shakers who made this happen, are glorying in this stunning achievement. Sitting in absurdly expensive seats, munching on $11 turkey sandwiches, quaffing $6 beers and $4.25 soft drinks, citizens savored “Life In The Fast Lane,” and will root on an undermanned Cardinal team. Or, if so inclined, simply ignore the games and gather in any of several large areas set aside to eat, drink and schmooze.

The hope is that the place will reignite an appreciation for downtown, foster the belief that center city is a safe, fun place to socialize, dine and be entertained. The hope is that the magnitude of the project will fuel interest and investment from an expanding corporate America.

Let it be said, let it be done.