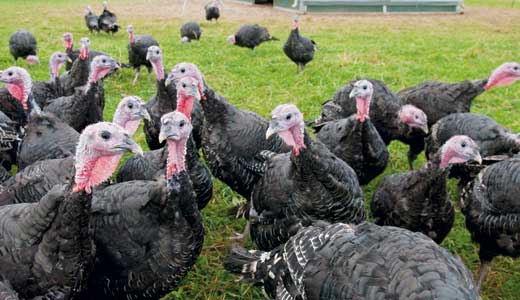 Thanksgiving has a lot of things going for it — A) it’s all about food, B) it’s a long holiday weekend that is mostly stress-free and requires no gift-giving, and C) see A. Thanksgiving is pretty awesome and delicious, but it’s not all pumpkin pie and happy, self-sacrificing turkeys.

Most of the year, the word “turkey” conjures up thoughts of cold cuts and bacon that’s not as good as the real deal. Thanksgiving is the one day of the year that turkey gets the spotlight on the dinner table — and nearly every household in the United States partakes in this epicurean delight. While most people are voraciously eating turkey and giving thanks to all there is to be thankful for, few are thinking about where their turkey came from.

I’m not trying to rain on your Thanksgiving parade, but the reality is that most turkeys that end up on our dinner plates come from factory farms, or Concentrated Animal Feeding Operations (CAFOs). CAFOs bring feed to the animals as opposed to the animals seeking food in pastures or grazing, and they also contribute a significant amount of pollutants due to the density of the animal population in a small space. (The industry average for commercially raised turkeys is 2.5 square feet per bird.) Since the animals are confined to small spaces, they are often given antibiotics to keep them from getting diseases from the close contact they have with fecal matter and each other.

As American consumers have continued holding white meat as the superior part of the turkey, the vast majority of commercially produced turkeys are anatomically disproportionate, with breasts so large they are no longer able to fly. They often end up unable to walk because of joint disorders from skeletons that have not grown at the same rate as body mass.

Only 50 years ago, an estimated 200 breeds of turkeys were produced, but today, less than 1 percent of the turkeys produced for food are “heritage” breeds, and almost all are Broad-Breasted White Turkeys.

Before you swear off turkey for good, you may be relieved to know there are better options out there than your beloved Butterball.

First, choose a turkey that doesn’t do drugs. Look for turkeys that are labeled “free of antibiotics.” Next, look for turkeys that are free-range or — better yet — pastured. Free-range means that the turkeys are not caged and have room to roam, but pastured means that they have access to green pastures. Because the birds are able to forage for their food, they get different nutrients than they would from a diet made exclusively of corn and soy. Certified organic turkeys, if fed grain, are fed exclusively certified organic, non-genetically modified grains.

Choosing a turkey that is locally or regionally produced will give you a fresher turkey that has traveled fewer miles to get to your plate. There are a few farmers, stores and organizations in town that are selling heritage breed turkeys. These cost more, but usually make up for the difference in freshness and flavor. This year, why not be thankful for the option of having a humanely raised and more nutritious turkey on your dinner table?

When you think about all the global issues we have to fight, global warming, hunger and even water shortage come to mind. Unfortunately, soil issues like erosion and nutrient depletion aren’t usually in the top 10. In truth, soil issues are food and environmental issues.

The first lesson I learned when I took a landscaping class was plants don’t grow in dirt, they grow in soil. For some, this may sound like splitting hairs, but soil, unlike dirt, is a complex mix of minerals, organic matter and microorganisms. Good soil is the foundation for growing healthy plants, and the nutrient-rich topsoil is only found on a thin top layer of the ground. If you don’t know why healthy soil is important to you personally, let me break it down for you: You eat food. Our food is grown in soil. Soil is under attack.

Commercial farming methods that use plowing and tilling stir up the soil and result in a loss of nutrients. Fields that are left uncovered and bare experience a loss of nutrition in the soil and experience soil erosion from wind and water. As the boundaries of our cities push further into our rural lands and our tillable earth turns into houses, shopping centers and roads, an estimated 1 million acres of land in the United States is lost every year.

Because soil is interconnected with so many global problems, including food production and global warming, it is not surprising that the Festival of Faiths chose “Sacred Soil” as the theme for this year’s event. The Festival of Faiths is an annual event that is facilitated by the Center for Interfaith Relations. It runs from Nov. 3-9, and most of its events are held at the Henry Clay Building (604 S. Third St.). A theme is chosen each year (last year’s theme was “Sacred Water”), and a series of thought-provoking lectures and film screenings take place over the course of several days that include faith leaders, environmental experts and community advocates.

There are more than 50 scheduled events at Festival of Faiths, and a couple will be of particular interest to local foodies, including “Sacred Soil: A Kentucky Conversation” (Nov. 5, 5:30 p.m.), “Sacred Soil and Soul: Farming with a Purpose” (Nov. 6, 10 a.m.) and “Local Food Lunch with Will Allen” (Nov. 6, 11:30 a.m.). Go to www.festivaloffaiths.org for details.