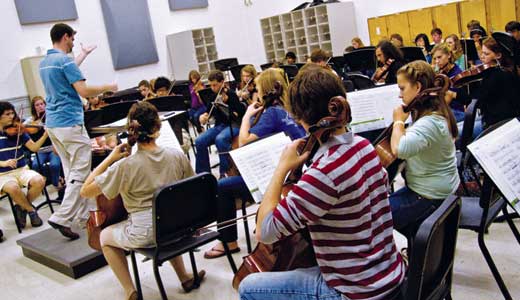 Jason Seber, left, leads the Symphony Youth Orchestra during a rehearsal for its Oct. 29 performance with My Morning Jacket at KFC Yum! Center.Photo: Ron Jasin

It’s the latter that has kept Jason Seber as music director of the Louisville Youth Orchestra for six years. As its conductor, Seber leads a group of 300 musicians ages 5 to 21 through the bottomless world of performance education.

But just because his students aren’t paid doesn’t mean they’re not professional. “When pros show up for the rehearsals, they already have learned all the music. It’s a much faster process,” says Seber, 35, a trained violinist with a master’s degree in conducting. “To stand up in front of a professional orchestra is exhilarating, because you can give a fantastic performance based on one or two rehearsals.

“On the other hand,” he says, “conducting kids is teaching: You’re hoping it transfers to the next concert and the next concert. Obviously they’re really excited, and they get into the music really well. They’re not always perfect, but their energy level is incredible.”

This Friday, Seber will lead 55 members of the youth symphony orchestra in arguably one of the biggest concerts they’ve ever played: performing alongside My Morning Jacket at KFC Yum! Center. Seber says orchestra board members had approached the band years ago, but it took this long for schedules and timing vis a vis the new arena to work out. The symphony orchestra has rehearsed the rock group’s material every Sunday for three hours since the second week of September.

Students have devoured the music. “Before we were doing this, at least a third of the kids were already big My Morning Jacket fans and had several albums on their iPods,” Seber says. “Since we’ve started the process, gradually more and more kids have become fans. When they can hear how their part is going to fit with the band, that has definitely gotten them more excited.”

Seber led the Cleveland Pops with former Chicago frontman Peter Cetera for an NBC Christmas Day broadcast a couple of years ago, but Friday’s concert will be his first with a rock band. The group rehearses with My Morning Jacket this week and will have a one-hour soundcheck the night of the show. Additionally, the LYO will perform one brand new song from the band’s forthcoming album.

To prepare his students, Seber has focused on getting them to watch one another while they play, and playing loose. “Our stage will be wider but shallower than normal, so I’ve been trying to put them in challenging situations where they can’t necessarily hear each other,” Seber says. That includes rehearsing outside.

Friday night doubles as a fundraiser, as a dollar from each ticket will go to the LYO scholarship fund. The LYO has its own budget funded by membership fees, grants, Fund for the Arts, the Kentucky Arts Council and ticket sales, but it costs $350 per child for the whole season. The donation, Seber says, “will allow more at-risk kids to participate.”