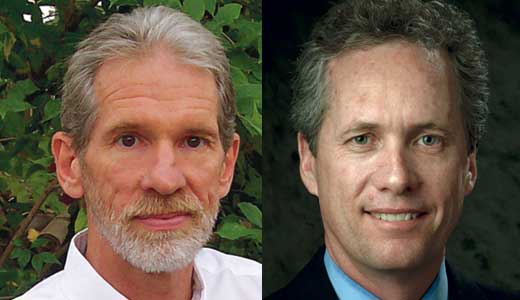 An offer that should’ve been refused?

According to e-mails obtained by LEO Weekly, independent mayoral candidate Jackie Green told his staff that Democrat Greg Fischer’s campaign “raised the issue of our team” playing a role in Metro government, while negotiating his departure from the race.

The question now is whether any laws were broken in the process.

For months, Green had tried to persuade Fischer to adopt key provisions from his platform: a greater commitment to public transportation ahead of the $4.1 billion Ohio River Bridges Project and pledging to seek greater funding for existing neighborhoods over new development.

In an Oct. 12 e-mail to his campaign staff, Green wrote that Fischer had called his cell phone. “You need to know something is cooking,” Green stated. “Keep this under wraps.” He also stated that he had met with Fischer earlier in the week.

On Oct. 13, Fischer campaign spokesman Chris Poynter, policy director Brandon Coan and Gill Holland, a member of Fischer’s environmental committee but not on the campaign payroll, met with Green to try to convince the cyclist to drop out before Election Day, Green told LEO.

In an e-mail sent that day to his staff, Green wrote that Fischer’s team was the first to raise the proposition of him being a part of the Democratic candidate’s administration, should Fischer be elected.

Both Green and the Fischer campaign have denied any job was offered in exchange for an endorsement, but one former Green campaign staffer, who asked to remain anonymous, worries about possible impropriety.

“They talked about specific roles and specific things. And the fact Jackie played with the language and was willing to trade concessions — that’s illegal. And I don’t want to be involved in this,” the former staffer says. “What he’s done and what has gone on is against the law, in my opinion.”

After the Oct. 13 meeting, Green and Poynter exchanged a series of e-mails the next day regarding the wording of a press release titled, “Green Withdraws from Race, Endorses Fischer For Mayor.” In the exchange, Green wrote that he didn’t think draft versions of the press release took a strong enough position against so-called greenfield development — turning rural land into business parks or subdivisions — nor did it place public transit as a “higher priority than interstate hwy (sic) infrastructure.”

“How can we strengthen the statement re: greenfield dev?” Green wrote.

In an interview with LEO last Friday, Green said Fischer wasn’t closer to making any specific commitments, and he was still in the race.

Yet, a few hours later, around 7 p.m., Green announced he was out of the race and would endorse Fischer. None of the concessions he insisted upon earlier that week in e-mails to his campaign staff were made in the announcement.

In the final version of the press release sent to news media at 6:57 p.m. last Friday, Fischer said Green would have “significant input” in structuring the cabinet-level Office of Sustainability, a department the Democrat said he would create. Green told LEO that someone from his campaign should either run or select who runs that office, and that his name was on a short list of potential candidates to run the department.

Meanwhile, Republican candidate and Metro Councilman Hal Heiner pounced on the announcement, accusing Fischer of trading a government post for a political favor. In a statement, the East End Republican called on Fischer to release all documents drafted with Green before receiving his support.

“On Friday, my opponent sent a clear message to the community about how he plans to run the mayor’s office,” Heiner stated. “Negotiating the makeup of governmental departments behind closed doors in an attempt to secure an endorsement is the same old politics that has kept Louisville behind for so long … As mayor I will continue to fight for the taxpayers and let the sun shine in. We should never forget government exists to serve the people, not the self interest of a political campaign.”

State law prohibits candidates from making “expenditure, loan, promise, agreement or contract as to action when elected, in consideration for a vote.” Any person who knowingly violates this law could be charged with a Class D felony, punishable by up to one to five years
in prison.

Fischer dismissed Heiner’s charges of impropriety and said Green was the first to ask about having a role in his administration.

“I don’t know if it’s desperate or what they’re doing. I mean, the only deal we made Jackie Green was he asked if we’d like his endorsement, and I said, ‘Sure,’” Fischer says. “And you know, what he’d like to have out of that is a voice in our sustainability initiative. You’re welcome to have a voice in our sustainability issues, too. We’re not violating KRS-whatever. I think Hal’s really grasping for straws here.”

The Fischer campaign has refused media requests to share the e-mails.