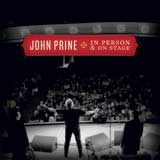 John Prine has been a favorite among music geeks and songwriters for four decades, on account of his clever and irreverent lyrics that often give way to deeply soulful observations on the human condition. On In Person & On Stage, his latest live album, Prine thumbs through his musical scrapbook and brings some friends along for the ride. The breathtaking moment here is a duet with the exquisite Emmylou Harris on “Angel From Montgomery.” Harris owns this song. In his original version (and hundreds of subsequent cover versions), aching lyrics and haunting melody frame one of the most beautiful songs ever written. His duets with ex-Nickel Creeker Sara Watkins (“The Late John Garfield Blues”) and Josh Ritter (“Mexican Home”) are certainly peaks in their own right but hardly match Prine’s chemistry with Harris. Prine performs Oct. 22 at the Palace (625 S. Fourth St.).