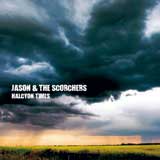 Halcyon Times is the first album Jason & The Scorchers have recorded with the original line-up in 14 years. As one of the architects of what would become the now hipster-friendly alt-country scene, these guys have endured break-ups and reunions, been signed, dropped and signed again. Their woe backs up their bleak tales of blue-collar Americana, which is why, when Jason Ringenberg sings He’s a moonshine man in a six-pack world, he’s talking about himself. Thirty years in, the band sounds as young and vibrant as ever on the reflective “Golden Days.” At the end of the day, this record reminds you that rock ’n’ roll bands don’t come with an expiration date.