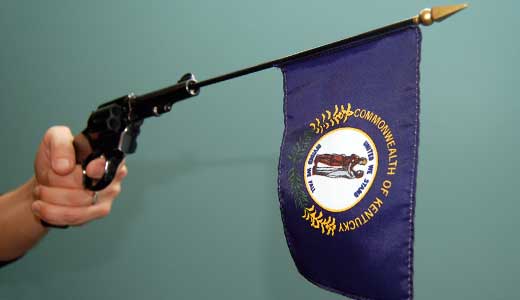 The 8-year-old elementary school student was carrying a sturdy Beretta .380. He wouldn’t say how he got it, but Eddie Woods is sure he got it illegally.

“I don’t know a child that can’t get a gun if they want one,” says Woods, founder of the LIFE Institute, which works with at-risk youth.

“In our group sessions, we ask the kids if they have one, and almost unanimously — even our prep students, suburban kids who live in gated communities — they can get a handgun if they want one. There’s significant firepower being traded out here. A person with a gun can make the sale, and a person with the money can get the purchase.”

Eventually those firearms spill out into the streets and are exported to other parts of the country, says Woods. He says there is a black market with buyers coming from as far as New York City to get cheaper guns.

When it comes to the illicit firearms trade, Kentucky is one of the top guns: According to a report from the nonprofit Mayors Against Illegal Guns, Kentucky ranks third nationwide in exporting guns used in domestic crimes, behind only West Virginia and Mississippi.

In response, the nonprofit coalition of more than 500 mayors is launching a campaign aimed at the state’s lax gun laws, which they say could foster illegal interstate trafficking. Gun control proponents want further examination and eventual action, but state lawmakers, many of whom are strong Second Amendment advocates, continue to push for legislation in the opposite direction.

Kentucky’s illegal guns end up mainly in neighboring states like Ohio, where 239 firearms were used in crimes committed there, ahead of Tennessee, Illinois and Indiana. But the crimes don’t end there. Additionally, 78 illegal guns from Kentucky were recovered from crimes committed in Florida, and 53 ended up in California.

The travel of Kentucky’s guns may have to do with the state’s gun culture: The state exports 34.9 firearms used in crimes for every 100,000 residents — more than twice the national average, according to the report.

Kentucky lacks any of the 10 provisions that would curb illegal firearms trafficking significantly, the coalition says. For example, the state has no penalties against buying a gun with false identification or for selling one without a background check.

“We can say none of the states with the high rate do have the (stricter) laws, and we think there’s a relationship that merits more study,” says Jason Post, spokesman for Mayors Against Illegal Guns. “We know that bad guys know where it’s easy to get guns. We don’t have all the answers, but we’re here to share the information, and we console with our members on the best way to approach this because each state is unique.”

The coalition favors background checks during gun shows and barring offenders with violent misdemeanor charges to posses a handgun. Gun rights advocates argue that putting further restrictions on responsible owners is a scapegoat for rising crime in other parts of the country.

“I don’t think our laws have any impact on crime in other states. They need to deal with their crime problem instead of trying to blame somebody else,” says Rep. Robert Damron, D-Nicholasville. “You can’t take guns away from law-abiding citizens and affect criminal activity. We don’t need to be putting further restrictions here on law-abiding citizens to fix the crime in Chicago.”

In 2008, he sponsored a bill to allow students at state-funded universities to keep firearms in their vehicles while on campus — which is prohibited by the universities themselves. The conservative Democrat says he will co-sponsor any similar legislation if it comes up at next year’s General Assembly.

Damron says he does disagree with a controversial piece of legislation that could end up making Kentucky more gun-friendly and put more firearms on the black market.

Last month, Rep. Mike Harmon, R-Danville, a candidate for lieutenant governor, said he plans to file a bill at next year’s General Assembly that would allow residents to carry concealed weapons without obtaining a permit.

“I think that’s a purist position,” Damron says. “I’m trying to build cooperation with other states. And I think they need to prosecute the people who violate the law in those states like we do here.”