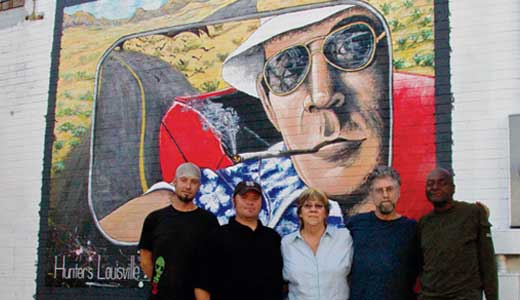 Hunter S. Thompson’s legacy energizes and inspires the local art scene as well as his chosen calling: journalism. But many in Louisville think there should be more. “I know that when he came to town with Johnny Depp (who played Hunter on film), what the city did was a big deal, but not as big as what he deserved,” says Dennie Humphrey, owner of The Monkey Wrench on Barret Avenue. All day and long into the night on Saturday, the restaurant/club will celebrate and appreciate Thompson and his inimitable Gonzo style.

The first Gonzo Fest will include a full lineup of music by a well-chosen mix of acts, plus prose and poetry readings and art displays. Also, as was part of Hunter’s legend, more than a little drinking should be expected. That being said, the premier guest at the event wants to make sure that the record is straight on the journalist as a writer and as a party-person. Hunter’s widow, Anita Thompson, says it this way: “Some people confuse his lifestyle with his genius; they didn’t see the time he spent perfecting his style in his medium of words.” Among the ways Anita addresses such skewed perceptions is The Gonzo Foundation, which will benefit from the proceeds of Saturday’s event.

Anita says it’s important to her “that the foundation support good writing and good journalism. In such a tough economy, the focus now is not on quality writing and investigative journalism.” The foundation is about to introduce a writing contest to win a book contract. In a twist that will bring a knowing smile to many writers, the contest’s entry fee will be waived for submissions that include a rejection slip. “Hunter was very proud of his rejection slips — once he became a famous American writer,” she says.

The entertainment at the fest is no one’s idea of rejects, including The Commonwealth, Brigid Kaelin, Your News Vehicles and Tyrone Cotton. The Galoots also return to the site of their long-awaited reunion a few months back. “I’m the only guy who can get those guys together to do something!” Humphrey says.

Besides music, a parallel lineup of stimulating poets and other artists will read, including Hunter’s old friend Ron Whitehead, Ike Moody and Andy Cook. Upstairs will be a two-hour block of spoken word and acoustic music. “If anyone just wants to read from Hunter’s work, there they’ll have an audience,” Humphrey says.

For the club owner, setting up this fest was an intense labor of love. Some help came via Flying Dog Ales, the Maryland craft brewery that markets its product with art by Thompson compatriot Ralph Steadman, and that has put on similar events in other parts of the country. The beermakers immediately jumped in to join the local talent that’s supporting Louisville’s version of what should be a memorable occasion. Anita, who’s flying in from Aspen, Colo., says she looks forward to catching up with old friends, but she wants it known: “I love to spend time with anyone who loved Hunter, who loves his writing, his humor.”