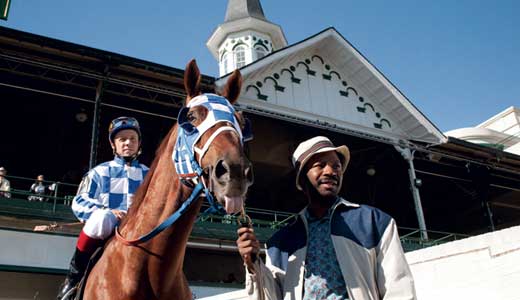 The stable is down on its luck.

The horses aren’t winning, and the bank is about to take everything that’s left.

Or, the beat-up jock and the old trainer are down on their luck, cast aside on the junk heap of losers.

Or, the farm is down to one mare and her very last foal.

There are a hundred variations of how one horse comes along to save the farm. A hundred Walter Brennens and Loretta Youngs. A hundred Black Stallions and Seabiscuits.

But none of it ever goes out of style. The romance of the turf is never tired, because it’s always true. The smell of liniment and the sounds of hoofbeats at dawn. The clicking of a stopwatch that’s just one $2 bet from the pawnshop. Crafty trainers and crafty jockeys, and racehorse owners who only wish they were crafty enough to come up with one horse who could step onto the track for the singing of “My Old Kentucky Home.” There is romance in horse racing. True stories from an almost make-believe world that fit perfectly on the silver screen — and “Secretariat” is one of them. The movie isn’t just true to the tale, it’s true to the turf, getting just right the special dynamic that exists between the people of horse racing — the trainers and owners and jockeys and fans — and the horses. They’re all in it together, and in “Secretariat,” we’re in there with them.

In one scene in the movie, Penny Chenery Tweedy goes to New York to meet jockey Ron Turcotte to see if Turcotte is the right rider for her horse Secretariat. Turcotte arrives on crutches and all bandaged up from a recent bad spill. Chenery says her trainer Lucien Laurin has recommended him, but she wonders if Turcotte will be ready to ride the horse in less than two weeks.

“Why wouldn’t I be?” says Turcotte.

And that’s the way it really is in horse racing.

Sitting a row in front of us at the premiere of “Secretariat” at the Kentucky Theater Sunday night in Lexington, jockey Calvin Borel nodded his head at that. As did Jean Cruguet, who rode Seattle Slew. And Turcotte. All of them in attendance for the screening, and all knowing that’s just exactly right. Beat up, broke down, can’t walk without crutches, bandages around his head — why would he be ready?

It’s what novice owner Chenery, played beautifully in the movie by actress Diane Lane, is finding out about the world of the turf — and the kind of indomitable spirit she brings to that world by gluing together the principal players in the stable to guide the career of one of the greatest horses of the 20th century. Maybe any century. Secretariat, the horse, happened 37 years ago, but it seems like only yesterday on the turf. Just a blink ago that Penny Chenery and Secretariat came along to save the farm.

Oh, the movie rounds off some of the details to carry the story more simply. Such as it’s left out that before Secretariat came along, his one-year-older stable mate Riva Ridge was already working on it, winning the 1972 Kentucky Derby the year before Secretariat would win the ’73 Derby. But the story is about the winner of the 99th Run for the Roses, who took his Derby in track-record time, before the then-largest crowd ever assembled at Churchill Downs — 134,476, including me. Horse racing is filled with a myriad of intricate details. There’s a lot to know, for example, before one understands how Secretariat is “by Bold Ruler, out of Somethingroyal, she by Princequillo.” But anyone can understand the moment late at night in the foaling shed at The Meadow, when Somethingroyal brings Secretariat into the world, and the long-legged foal scrambles to his feet for the first time.

Director Randall Wallace sets the story from the start inside the world of horses and racing, when Penny Chenery Tweedy, wife and mother of four in Denver, is suddenly called home to the family farm in Virginia, upon the death of her mother. She finds her father in failing health, as well, and the farm sliding downhill with the inevitable financial problems that come when the horses stop winning. We meet prominent horse breeder Bull Hancock, who offers sound advice, and loyal farm secretary Miss Ham, who tips Chenery to what’s been going on around the farm without her father able to manage things. And we meet Eddie Sweat, who will become Secretariat’s groom. When Chenery fires the farm’s shady trainer and hooks up with trainer Lucien Laurin — quirkily, comically and worriedly played by John Malkovich — the story is on.

The scene shifts to the bombastic world of the racetrack and Secretariat’s first victory at Saratoga Racecourse. Soon the sporting world is learning about the star young racehorse — and the stable of people around him.

Bill Nack followed the story for Sports Illustrated and then wrote the book “Secretariat: The Making of a Champion.” He and fellow scribe Andy Beyer, of the Washington Post, are depicted in the movie, following the horse story, dropping in critical observations for the movie audience, much as they did at the time for their readers. Nack says he appreciates how the movie gets the internal workings of the racetrack and its horse people right.

“What I like is the effect this animal had on people’s lives,” says Nack. “How people orbited around him — including me — and the effect he had on Penny. He had his own gravitational field, this horse. It was a powerful force, and it made Lucien Laurin anew. It turned him into a Hall of Fame trainer. Riva Ridge might have opened the door, but this horse walked him in. Turcotte, it changed his life, made him a celebrity jockey, really. It gave me a book project for the first time in my life. And it turned Eddie Sweat into the most famous groom in America. Everybody knew who he was — he was a celebrity. And all of the (breeding) syndicate members made oodles of money.

“And most of all, Penny,” adds Nack. “She went through a lot of difficulties with the family and the farm. She was under pressure to sell everything, sell Secretariat and invest it all in the stock market. That part is true.”

Every great Hollywood tale needs a problem, an interruption in a series of triumphs. And screenwriter Mike Rich didn’t have to make one up. He just needed to recreate the denouement of the hero, which actually occurred when Secretariat lost his final prep race for the Kentucky Derby. Got beat, really.

Under the grandstand at Aqueduct, amid the stark steel beams and gray concrete floor, far removed from the glamours of the Turf Club above, the principals — Chenery, Laurin and Turcotte — are gathered in dismay. Blame is handed out.

“All that’s very real,” says Otto Thorworth, a real-life jockey who plays Turcotte in the film. He certainly lived the ups and downs of wins and losses in his years riding. “You see the stress. Penny wanting to fire the trainer and the jock. That’s real life. When the horse loses, it’s never the horse’s fault. But them horses are just like us. They wake up some days and they feel great, and other days you just don’t feel like going to work. I had horses I thought were a cinch to win, and then they didn’t run.”

At the end of the scene, Chenery and Thorworth walk away together: she with her hand on his shoulder, and he with that bowlegged list that jocks earn on the track.

The shocking loss ramped up the pressure on the stable as Secretariat shipped to Kentucky. But again, Chenery takes the lead for the stable. As Secretariat is being unloaded from the van at Churchill Downs, the press — now worldwide in scope — swoops in.

Laurin tells Chenery: “We’ll get the horse ready, you handle the reporters.”

Which is exactly what happened in 1973. Chenery long ago said it was a job for which she was already preparing.

“I looked around and everyone had a job to do,” Chenery previously told this writer. “The trainer, the jockey, the exercise rider, the groom — everybody had a job but me. But I came to realize what everyone wanted most to know about was the horse, and he couldn’t talk. So I decided I would talk for him.”

In the movie, the press is firing questions at Laurin as he walks on with the horse. But Chenery, normally reserved in such situations, turns to face the press straightaway, declaring, “I speak for the horse.”

Sunday night, Lane and Chenery, now 88, walked the red carpet at the premiere. Lane spent time with Chenery during the filming of the movie, and then Sunday the two Pennies flew together to Lexington from Los Angeles. Chenery had just presented the winner’s trophy at Hollywood Park to the owners of Zenyatta after the unbeaten star of today had just won her 19th straight race, reaffirming her role as favorite for the upcoming Breeders’ Cup Classic at Churchill Downs. Lane says the pair spent the flight in “chat time.” She says Chenery and her horse story is the real thing.

“It’s a story that’s been trying to get to the big screen ever since it happened, and I’m just so grateful that it took so long so I could be in it,” says Lane. “The most important thing you learn from Penny, that I’m still learning, is in terms of how she carries herself, as a female representing all of us. I think the fact that Penny was never hijacked by any agenda … is why she is known for her deeds.”

The horse’s star charisma is probably best represented in the movie by the contrast of his plain folks groom, Eddie Sweat, played by Nelsan Ellis.

Chenery wonders what Secretariat is thinking. “My daddy says you can hear the horses’ thoughts through your hands,” she says.

“Clouds and stuff don’t mean nothing to a horse,” answers Sweat. “Lights and sounds, flashes, that’s what a horse notices. Horses like Big Red here pay attention to a horse behind him that wants to be first to the food, first to the mare, first to the finish line. That’s what matters to him.”

We see that best in the tiniest close-up shot of Secretariat’s hooves as the horse sets himself in the starting gate for the Kentucky Derby. Cinematographer Dean Semler came up with a special mounting for tiny cameras that bring the audience close to the living, breathing animal.

Secretariat flicks the dirt with his hooves and digs in. Horse. Hooves. Dirt.