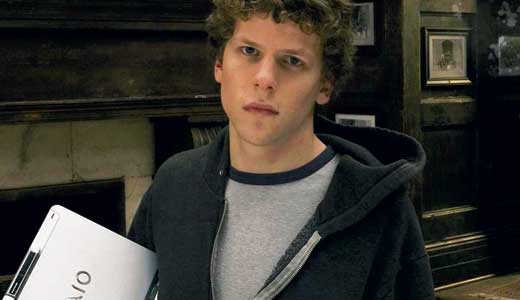 “The Social Network” is somewhat miraculous. We begin with all the elements for “Revenge of the Nerds” or a cheap TV exposé: the true story of neurotic college sophomore Mark Zuckerberg whose painfully strong desire to stand out amongst the Harvard elite inspired him to create the global social phenomenon we know as Facebook, and become the world’s youngest billionaire. However, almost immediately, director David Fincher’s sleek, controlled orchestration of images, sounds and actors lets us know that we’re at least in the territory of “Wall Street” here. This will be a serious dissection of ambition, greed, friendship and loyalty.

Soon enough, it’s clear that writer Aaron Sorkin has fashioned a gorgeous ice sculpture out of the messy real-life battles between the brilliant, obnoxious, fascinating Zuckerberg and the people surrounding him during Facebook’s ethically shaky genesis. The story gracefully pirouettes around different points in time, slowly building up the elements of a great American tragedy: Mark’s lowly inspiration (online retribution against an ex-girlfriend), his epiphany (that people wanted a truly interactive social experience on the Internet), transformation (dropping out of Harvard to work on a website), inevitable seduction (via devilish Napster creator Sean Parker, ably embodied by Justin Timberlake), and corruption (early on we see that Mark’s only real friend ends up suing him).

Along the way, smooth, stealthy editing sweeps the viewer along with the incredible momentum of an Internet start-up exploding into a household name. We are immersed in the neon glamour of venture capitalists, share in the grimy partying of horny 20-year-old boys with loads of cash, and get lost in a blur of bitter lawsuit depositions and all-night programming sessions. “The Social Network” is a brilliant synthesis of current cultural notions of technological alienation, American achievement obsession, and intellectual property rights, and classic, old-fashioned drama: boy loses girl, nerdy underdog vs. privileged elites, man loses his self in quest for greatness.

Sorkin’s incredible machine-gun dialogue and Fincher’s gorgeous tableaux help raise this story to an artful level, but possibly the most important factor here is Jesse Eisenberg’s performance as Zuckerberg. He’s somewhat of an enigma, all folded arms, darting eyes and awkward silences punctuated with coldly devastating verbal lash-outs. We’re shown virtually no backstory to characterize Mark, and yet Eisenberg somehow lets the audience feel the human being beneath the churning ambition and razor-honed defense mechanisms. Mark should be impossible to like, but Eisenberg makes us feel for him enough that when he makes his most questionable decisions, it’s hard to totally condemn him. With this bit of actorly alchemy, a very good movie is pushed into the realm of greatness. “Wall Street” is transmuted into “Citizen Kane.”

Actually, the core of what’s interesting about Mark Zuckerberg, Facebook and “The Social Network” is neatly expressed in the lyrics of the Radiohead song “Creep,” used to beautiful effect in the film’s trailer: I don’t care if it hurts, I want to have control, I want a perfect body, I want a perfect soul, I wish I was special, but I’m a creep.

Zuckerberg is the ultimate control freak, but like most of us, he really just wants to be loved. So he created a version of human intimacy made of settings and preferences and lines of code — a place where you can give the world a more ideal expression of yourself, where you can have a perfect soul … and it was wildly popular. Yes, Mark, you are kind of a creep, but you seem kind of special, too.