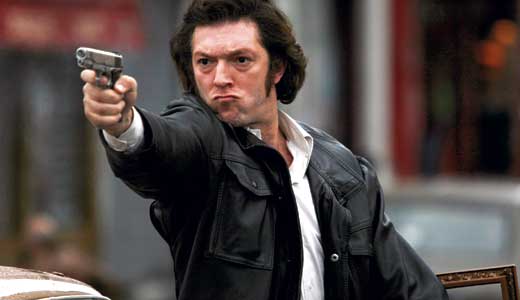 You’ve seen Vincent Cassel before. The droopy-eyed, pointy-nosed Frenchman plays characters as charming as they are ruthless. The actor can be at once ugly and pretty, with an oscillating magnetism that makes him hard to look at in one frame, impossible to look away from in the next.

Nominated for multiple Cesar Awards (France’s Best Actor) including a win for his turn as Jacques Mesrine, Cassel also appears regularly in English language films like: “Ocean’s Twelve,” “Eastern Promises” and the anticipated “Black Swan,” director Darren Aronofsky’s follow-up to “The Wrestler.” If you missed these, you’ve likely heard him voice Monsieur Hood in “Shrek.”

“Mesrine” parts one and two (“Killer Instinct” and “Public Enemy Number One”) show Cassel at his best. The actor is a natural fit in this detailed, if not exhaustive account of Jacques Mesrine, a repugnant but charismatic bank robber known in France as “the man of a hundred faces.” Cassel shows off a few of his own while portraying the celebrity bad guy, often without the aid of special-effects make-up. Cassel seems to subtly age on command, while depicting Mesrine during various stages of his crime career.

Cassel has indicated in interviews that one challenge was presenting the villain for who he really was without alienating audiences. A murderous racist and wife-beater, the real-life criminal managed anti-hero status with his shows of undeniable panache. Cassel captures this balance, and if it was a challenge for him, it does not show on screen. When a generation of cinemagoers hear the name “Mesrine,” it’s likely they will see Cassel’s face.

On the downside: If it feels like you’ve already seen the one about an enchanting womanizer’s brutal rise and fall in the world of organized crime, it’s because you have. This tense saga does recall classic American gangster epics. A hit in France and the UK, it remains to be seen whether the films play as well in a country less familiar with Mesrine, who was once voted France’s most popular figure.

As good as he is, four-plus hours is a lot of Cassel — even broken up in two parts. By the time part two rolls around — “Killer Instinct” opens Friday, “Public Enemy Number One” on Nov. 12 — a little of the magic wears off. Part of this is the absence in act two of Gerard Depardieu, who is nearly unrecognizable as Guido, Mesrine’s crime boss/father figure.

Depardieu brings weight to part one, and Cassel is much stronger when opposite the fellow Cesar winner (15 noms, two wins). Without Guido as anchor, Mesrine is adrift and less sympathetic. Now a delusional, arrogant faux-revolutionary, the character loses charm.

That is not to say the flashier sequel doesn’t have its moments. Both films are of high quality — particularly if you can spare the time.