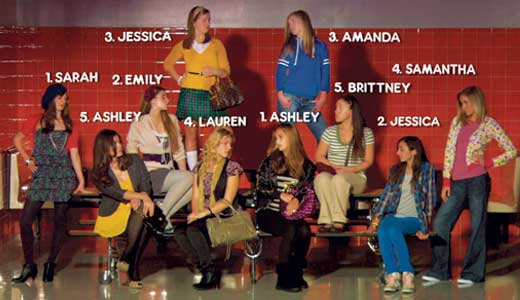 Riding the A train through East New York years ago, I overheard a conversation between two young black girls about the names of their classmates. The coolest sounding ones, they believed, always had a qu in the spelling: Shaqueena, Tamiqua, etc. One girl then said to the other, “Well, I have the coolest name of all. I have two qu’s in my name.”

She paused for effect as I racked my brain — a name with two sets of qu’s? Impossible!

“Quiniqua!” The girl announced, spelling it out for her friend.

I was reminded of this exchange while watching a scene in “Freakonomics,” the new documentary based on Steven Levitt and Stephen J. Dubner’s 2005 book of the same name. Levitt, dubbed a “rogue economist,” is known for presenting poppy, socio-economic quandaries, like: Are people with names like Quiniqua more likely to be overlooked by members of the hiring class?

Sadly, the research put forth in “Freakonomics” indicates yes. The segment, entitled “A Roshanda by Any Other Name” and directed by “Supersize Me” Morgan Spurlock, ends with another question: Is it worth naming a black child Sarah or Megan simply to ensure her resume won’t be automatically pushed aside in the future?

The answer offered in the film is similar to what I gleaned from that subway conversation. Names that might seem foreign, burdensome or even comical to people of a certain background are, actually, badges that provide identity and a sense of belonging to their bearers.

Though outcomes like these will seem elementary to some, the questions asked by the filmmakers and some of the steps taken to reach their conclusions can be amusing, provocative and fascinating — like learning that there were 228 uniquely named black girls born in the state of California during the 1990s, three of those being Uneek, Uneque and Uneqqee.

That said, “Freakonomics” doesn’t always hit its mark. Its user-friendly style can feel condescending in places. Also, questions have been raised about some of Levitt’s techniques. When the material does miss, though, we are often left with something to ponder.

For instance, was the passing of Roe v. Wade a bigger factor in 1990s crime reduction than improved policing techniques and an increased prison population? “Freakonomics” would like you to believe so, and, as much as I wanted to take this leap with the filmmakers, something wasn’t quite adding up.

That segment, “It’s Not Always a Wonderful Life,” by Eugene Jarecki, posits former Romanian President Nicolae Ceausescu’s reign as a counter-argument. Ceausescu’s government forbade abortion and enacted strict policies to reverse Romania’s low birth rates. The filmmakers argue that by time the ’90s rolled around, Romania was filled with unwanted children who were coming of age — a condition much less existent in America because of a generation’s right to chose. This may be true, but the implication is that the crime rate plummeted here as a result and, therefore, must have skyrocketed in Romania.

What is withheld from the audience is the actual crime rate in Romania. I’ve spent time in Bucharest and have had my shirt sleeve tugged on by street urchins. But never did I fear for my life the way I did, at times, riding that same A train in the late 1980s. Discounting petty theft, the crime rate in Bucharest is (and was) among the lowest of any European capital.

While the footage of Ceausescu’s dictatorship cuts nicely with clips of ’80s-style American crime, Romania’s inclusion in Levitt’s otherwise compelling theory is a bit of a red herring. This is part of what makes “Freakonomics” watchable, but not something you’d want to base a belief system on.