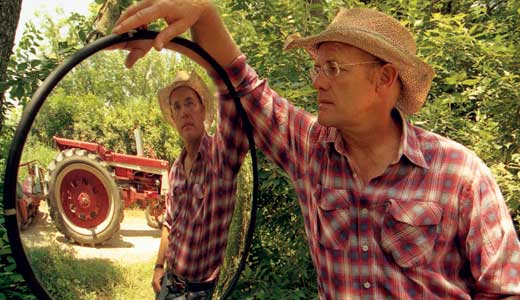 With religious intolerance seemingly going mainstream (see: Quran-burning pastors, or the one-in-five who still insist a cunning Muslim occupies the White House), this year’s Festival of Faiths may be arriving just in time. Now in its 15th year, the Center for Interfaith Relations’ weeklong event continues its mission to bring people of varied religious persuasion under one tent. To help foster understanding between different faiths, the organizers select a theme each year that’s meant to unite its participants with a specific focus. This edition concentrates on sustainable agriculture and is titled “Sacred Soil.” Things kicked off earlier this year with a diversely attended groundbreaking for a community vegetable garden in the West End.

In its efforts to draw bigger crowds, the festival has invited the stars of agriculture you might expect, like: urban farmer Will Allen, recently named by Time magazine as one of the 100 most influential people in the world; Kentucky farmer/writer/activist Wendell Berry; and Wes Jackson, the genius grant winner whose Land Institute is developing perennial versions of wheat and sorghum. Mixed into the lineup are some unexpected fresh faces: My Morning Jacket frontman Jim James, for instance. Also new to the festival is a film series featuring four documentaries about dirt and farming.

The films open with a free screening of “Dirt! The Movie,” the Jamie Lee Curtis-narrated documentary from 2009. For a festival trying to motivate people to get their hands dirty, “Dirt!” is fitting. It reminds viewers that soil isn’t dead, nor should it be treated that way. (There can be up to 5 billion organisms in one handful.) “Dirt!” attempts to reacquaint us with the vital element we so often take for granted, with one scene in particular illustrating just how far removed some of us have become from it. When a green space advocate announces plans to replace the asphalt from a California schoolyard with grass and trees, a naysayer questions, “But where will the children play?”

Also featured is “Grown in Detroit,” an award-winning doc about efforts to fight urban decay in the Motor City with urban farms, and “Manufactured Landscapes,” which sets the large-scale photographs of Canadian artist Edward Burtynsky into motion. Using beautiful and haunting images of surface mines, dump sites, quarries and the like, Burtynsky’s work shows the crippling effects the industry can have on the planet.

If there’s a hidden gem in the bunch, it’s “The Real Dirt on Farmer John,” a moving portrait of John Peterson, an Illinois man who inherited his father’s 350-acre farm while attending nearby Beloit College during the hippie era. Peterson, a natural artist, writer and filmmaker, is prone to flamboyant flourishes that can evoke Warhol, even Elton John. This does not win him favor amongst his agrarian community who still recall the “well regarded” Petersons who farmed there before him. Peterson is harassed throughout his life by local kids and his sheriff neighbor, who suspect him of drug running, Satan worshipping and, at one point, murder.

Most striking about “Farmer John” is the home footage he’s collected through the years. These move from adorably nostalgic 1950s photography to grainy black-and-white footage of the dismal morning in the ’80s when Peterson was forced to auction his equipment to the same community that rejects him. But, as his farm dwindles to 22 acres and a lifetime of failure plows forth, Peterson never fully gives up on the farm — minus a couple of long sojourns to Mexico. His resolve is inspiring, and his story takes us to the extremities of a life in agriculture. Check out www.festivaloffaiths.org for times and details.