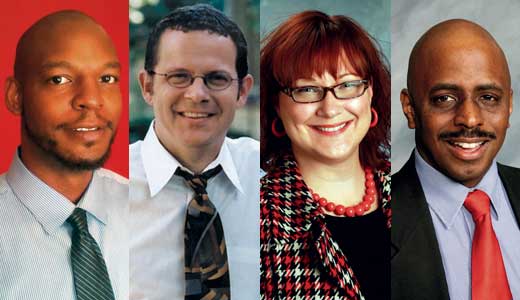 The sudden death of Councilman George Unseld created a power vacuum filled by ugly politicking. After hours of deliberation, Metro Council selected Hollowell, 31, a University of Louisville professor, as the city’s first independent representative and interim successor. Hollowell quickly jumped onto important initiatives in the district and successfully beat back a lawsuit challenging his eligibility.

Upset with Hollowell’s appointment, the Democratic Party selected James, a former LMPD officer and FOP president, to run for the seat. Despite questions about James’ residency and association with Councilman Jim King, D-10, James is the odds-on favorite in the heavily Democratic district.

Herndon launched an unexpected write-in candidacy that poses a threat to his opponents. In 2008, he lost by a razor-thin margin to Unseld in part because of a homophobic mailer campaign engineered by an anonymous slime-ball. Herndon’s popularity gives him more than a fighting chance.

Lost in the shuffle is Jaworski. The Republican underdog is chairwoman of the Advertising Federation of Louisville, a member of Young Professionals Association of Louisville, account manager at Bisig Impact Group and longtime usher at Actors Theatre. She has stayed above the race’s nastiness, which, unfortunately, is probably why she’s largely unknown.

Because we can’t think of anything bad to say about the 5th District incumbent, it means she’s doing something right. We advise her 25 Metro Council colleagues to use her as a role model on what (and what not) to do. Her opponent, Morris, 55, has run an invisible campaign. This is the third time he’s challenged Hamilton in eight years, and perhaps he will get visible votes.

Critics call the GOP incumbent a hardcore partisan. Supporters call him a champion of political transparency. If re-elected, expect the Republican vice-chair to rise to prominence in the coming year. As a full-time firefighter, ACLU board member, philanthropist, bartender, actor, teacher and occasional superhero, Look might be overqualified for Fleming’s seat.

All eyes are on the independent-minded councilwoman, who is the best candidate for council president whom we might actually like: From her stance on the Bridges Project to her levelheaded criticism of the Abramson administration, Ward-Pugh is a bright spot at City Hall. Duerrer, the Republican challenger, invokes national issues instead of nuts and bolts of neighborhood representin’. Points for ambition, though.

The south Louisville councilwoman and nurse of 34 years is confident she’ll retain her seat despite the speed bump of an ethics complaint filed against her. As for Davis? She thinks Welch focuses too much on Fairdale at the expense of other neighborhoods. It should be noted that Davis is a former legislative aide for Doug “MC Duckie Fresh” Hawkins. For a moderate voter, that alone should disqualify her from consideration.

The incumbent had put a lot of time and discretionary money into crime-fighting efforts in the 15th, specifically for extra Metro Police patrols. Harral, a political novice, plans to clean up the areas surrounding Churchill Downs and Central Avenue.

The 74-year-old East End Republican is a famous cheapskate, withholding discretionary funds for a rainy day yet to come. But he places an emphasis on public services, including parks and infrastructure projects. For the second time, Cohen, the owner of Smoothies For You, is challenging Stuckel with a message of new library construction and (we jest) free smoothies for the thirsty 17th.

The seat vacated by Republican mayoral candidate Hal Heiner pits Republican Miller, 58, against Chelf, 22. These two couldn’t be more different if they starred in an ’80s body-switch comedy. Miller is a retired Humana accountant and former chair of the Jefferson County Republican Party; Chelf is a recent college graduate and web-marketing entrepreneur.

Proving that partisanship doesn’t always matter, Peden has retained his seat in a heavily Democratic district in large part because of his advocacy of citizen involvement. Sommers, who has retired from Pacemaker, says Peden’s presence has been lacking in the southeastern district, citing a need for more transparency, increased pubic safety and streamlining regulations to allow for greater job creation.

For the eighth year in a row, Hawkins, a veritable one-man caucus, voted against the mayor’s budget, saying he doesn’t trust Abramson’s administration. The lone voter has for years been a thorn in the mayor’s side, opposing nearly everything he does. While we don’t agree with Hawkins’ politics, we admire his willingness to poke the eye of the establishment. Yates, 30, a personal injury lawyer, has railed against Hawkins’ obstructionism and has raised four times as much money as his opponent, but his hyperbolic campaign literature, in some ways, echoes Hawkins’ own rhetoric.