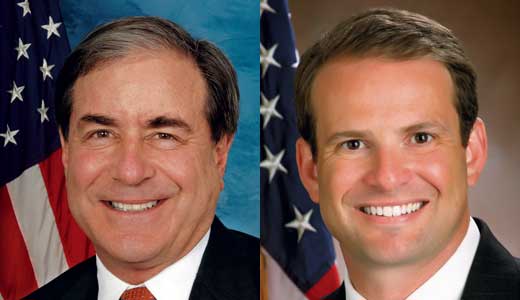 What a difference four years can make. When John Yarmuth ran for Congress in Kentucky’s 3rd District in 2006, he mounted a distinctly national campaign and veritably soldered George Bush to Anne Northup’s back. Yarmuth understood the public’s disgust with the Iraq War and other Bush policies and used it. Try as she may, Northup simply could not change that narrative.

Fast forward to 2010. Yarmuth, a two-term incumbent, is all “look what we’ve done for you, Louisville,” and this time it’s challenger Todd Lally who’s nationalized the race, linking Yarmuth to President Barack Obama and House Speaker Nancy Pelosi and invoking the national conservative narrative, espoused by tea party and non-tea partiers alike, that Democratic policies have utterly failed.

“Elections can be about many issues,” says Jasmine Farrier, associate professor of political science at the University of Louisville. “They can be local or national because House members are responsible for both.” How a candidate or member of Congress decides to juggle those two poles, she adds, is quite dependent on “the mood of nation at any one moment.”

In any case, she says, incumbents typically enjoy the advantage of touting local successes, which often seem to pick up steam near the end of an election cycle. Yarmuth, for example, has gotten mileage out of recent announcements concerning Ford Motor Co. and General Electric, and both his Congressional and campaign websites focus on policy. Conversely, she says, Lally’s site is less specific, and his campaign is more tuned into his party’s national theme.

Based on a wide range of votes she made while in Congress, the nonpartisan website OnTheIssues.org identifies Northup a “libertarian-leaning conservative.” (Yarmuth is her diametric opposite; the site calls him a “populist-leaning liberal.”)

As she climbed the Republican Party hierarchy, Northup did what most members of Congress try to do: She brought home the pork, and she let everyone know it. Farrier points out that The Courier-Journal, a longtime Northup hater, actually endorsed her in her 2004 race against Democrat Tony Miller, in large part because the paper’s editorial board realized Louisville might have much to lose by turning her out.

In 2002, Northup noted in a phone interview, she preferred to nationalize the election by talking about the war in Afghanistan. She was less eager to do so in 2006, though in hindsight, she says, her campaign should have addressed Bush’s shortcoming more directly in paid media.

Lally is singing the same refrain that can be heard nationally: The debt is out of control, and it’s Democrats’ fault.

Yarmuth, more than most Democrats this year, has not backed away from President Obama and House Speaker Pelosi. At last week’s Louisville Forum debate, he staunchly defended both while offering specific criticisms. And yet his paid media, which hasn’t mentioned Lally, does emphasize what he’s done for the district, while his campaign staff is happy to talk about what it sees as Lally’s arch-conservative bent and peculiar way of expressing it.

For example, Lally has called Social Security a Ponzi scheme, is skeptical about global warming, and, as an abortion foe, sees no exception in the case of rape or incest. He’s also cast doubt on the existence of gender discrimination, though at the forum debate he acknowledged that stance recently drew a stiff rebuke from his sister, who works for Dell computers.

One Democratic insider I spoke to says Lally comes by his conservatism honestly — he doesn’t believe the UPS pilot and former military officer is adjusting his posture simply to ride the national wave. Northup, who seemed to campaign more moderately than she voted in Congress, doesn’t believe Lally has run as an arch-conservative. “But anyone who is saying what he’s saying will be portrayed that way,” she says.

“Todd’s running as a tea party guy,” says longtime Republican State Rep. Bob Heleringer of Louisville, who says he will vote for Lally. “He doesn’t really have a voting record — I have a feeling that it would look pretty close to Anne’s. … She deviated in a couple of areas, but she was usually pretty doctrinaire, though she never really ran that way.”

Heleringer says the district is “very marginal … a moderate or leaning Democrat district,” and says he’s not convinced there’s a coming Republican tsunami. “We’ll pick up seats, obviously, but if we’re going to get control of Congress, the 3rd District is one of those marginal seats we’ll need to win.”

A recent cn2/Insight poll had Yarmuth leading by 23 points. Northup says that poll was taken before Lally increased his paid media, and Lally says internal polling shows the race much closer.