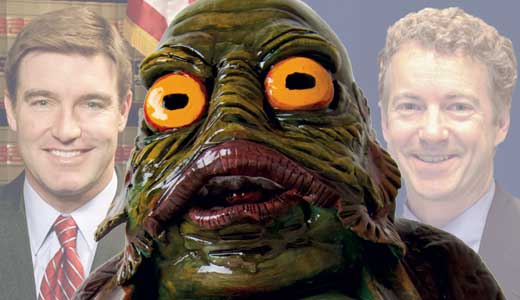 Over the last couple of weeks, Kentucky’s U.S. Senate race has degenerated into the typical electoral scenario you’ve come to expect from the American political process: Two wealthy men — one Republican, one Democrat — accusing each other of various bullshit designed to move the public’s attention away from so-called “real” issues and increasingly toward the Apocalyptic, grandmother-sodomizing, Mad Max-gang war scenarios that will ensue should their opponent be elected.

What we really want to know is this: Who loves Jesus more?

To wit: An ad released by Conway’s camp on Oct. 16 details the bizarre collegiate exploits of Paul, who was a member of a secret society while enrolled at Baylor University. “Why was Rand Paul a member of a secret society that called the holy Bible ‘a hoax,’ that was banned for mocking Christianity and Christ?” the narrator rhetorically intones. “Why did Rand Paul once tie a woman up and tell her to bow down before a false idol and say his god was ‘Aqua Buddha’? Why does Rand Paul now want to end all federal faith-based initiatives and even end the deductions for faith-based charities? Why are there so many questions about Rand Paul?”

Paul released a counter-ad saying he “keeps Christ in his heart.” But he’s yet to deny any of the charges made by Conway and the various publications that have corroborated those charges. Paul was a member of the pseudo-fraternity NoZe Brotherhood, and as a member of NoZe, he was involved in the forced bondage of a female student.

The Conway ad may go down in the annals of Kentucky political history, for its sheer cynicism and pitch-perfect exploitation of undereducated religious xenophobia, but the mystery of Aqua Buddha remains paramount — until now.

LEO Weekly recently sat down with Aqua Buddha in his underwater palace, near the sunken island nation of Lemuria in the 7th dimension, for an exclusive interview.

Aqua Buddha: Thirsty? I’ve got Fanta in glass bottles.
LEO: No, thanks.

AB: Wanna hit then? (He offers a hookah line feeding directly into his porcelain belly.) I’m a living bong, which is the only real power I have, besides making burritos appear out of thin air.
LEO: No, not while I’m working.
AB: Suit yourself. (Takes a hit, exhales.) I’ve been pretty stressed lately. I did an interview with The Washington Post the other day and was on Jimmy Kimmel the other night. First time I’ve been topside in decades, and backstage Andy Dick is trying to smoke me and I’m like, “Bitch, please!” Now that people believe in me again, I’m able to take a corporal form, but it seems like all they want is to mug for a joke, smoke my weed and help that pretty boy get elected.

LEO: Pretty boy? You’re referring to —
AB: Conway, yeah. We have a collectivist society down here, so we don’t really take to your terrene politicking. (Takes a hit, exhales.) I took what I could get in the ’80s from those NoZe douchebags — nobody else believed in me, but I’ve a good thing going here with these crab people. They don’t need to tie anybody up to worship me. But you ape-people … I mean, what is up with your species?

LEO: Let’s talk about the ad. Do you think it’s fair to tie Paul’s bizarre collegiate religiosity with his latter-day, self-professed belief in Jesus Christ? Should religion factor into any political race?
AB: I know Jesus, man. Good bowler. Fucker rolls strikes every time. (Takes a hit, exhales.) As a lesser deity, I don’t really get much face time with him, you know? During league matches, He’s always complaining about you guys, especially the politicians, how they use His name to win votes while they go around banging male prostitutes or stealing money or whatever it is they really do. Allah’s really bonded with him over this kind of stuff, turns out. But His is a kind of popularity I’m only now getting, so I’ll ride it for as long as it lasts.

LEO: What about Paul? Is it fair to make the race about his religion? What was the extent of his worship of you?
AB: Oh, god … I’m always pretty baked, so my memory isn’t the best. I do recall him being just another privileged trust-funder in a group of privileged trust-funders, but what politician isn’t? At the time, I was just starting out as a god, getting my feet wet, had a bad case of ’80s hair, you know, so I took what I could get; it just so happened that what I got was a gang of douchebags. But then, most guys are douchebags in college, so there. (Takes a hit, exhales, the hookah line retracts into his belly button.) Hungry?

LEO: I already ate.
AB: Whatever … (There is a blinding flash of light. When it recedes, Buddha is holding a head-sized burrito with both hands, eating it with vigor.) I understand the reservations some people might have about a politician not actually believing in Jesus, but that’s identity politics. Quite frankly, Jesus doesn’t give a shit if a senator or the pope or your mother believe in Him or not, from what I hear. But what should it matter? We’re only invoked once you assholes need something anyway, myself included, so how is that fair to us? I only matter in order to advance Conway’s agenda, and in the process my message of “Smoke Weed Every Day, Tie Up Your Loved Ones With Hemp” is falling on deaf ears.

LEO: Are you saying that voters shouldn’t take seriously the fact-based charges raised by the ad?
AB: No. It was despicable behavior, but it’s not the Crusades or the 700 Club, for Christ’s sakes. I needed followers, and those guys were willing to go the distance.

LEO: So the ends justify the means?
AB: Absolutely.

LEO: Isn’t that a little too calculating for a deity?
AB: It’s how the universe works. Religion and politics are now so tightly fused together in your society, that if an ad like Conway’s works and it wins him the election, you’re forever doomed to more of the same. Hell, you’re doomed anyway.

LEO: Why do you think Paul refuses to acknowledge his relationship with you?
AB: It’s a good distraction that keeps voters from looking too closely at both candidates’ flaws, specifically Paul’s. It just might win my curly headed former disciple a few sympathy votes, which — (His cell phone rings) — excuse me for a moment.

LEO: You have to go?
AB: (Nods, rubbing his hands together.) That was Oprah.