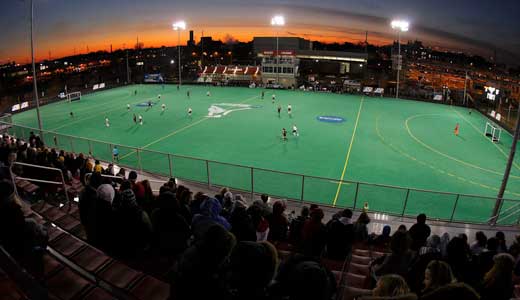 Trager Field stands just west of Interstate 65, down which more than 180,00 cars and trucks travel.photo: u of l sports information

Not one of these sites lies more than a mile from Interstate 65, which funnels more than 180,000 cars through Jefferson County every day. Athletes running, jumping and breathing these ozone and airborne particles are the same athletes we’re rooting for to win NCAA championships.

In short, the elephant in this room is wheezing.

Heavily populated interstates are one reason Louisville had the third-highest per capita carbon emissions among 13 peer cities nationwide in a 2005 Greater Louisville Project comparison. University athletes at Belknap Campus, who spend significant time outdoors close to I-65, are exposed to these pollutants at higher levels than less-active students.

Athletes who practice outdoors inhale more particulate matter 2.5, or PM2.5, the term for tiny airborne particles about one-20th the width of a human hair. PM2.5 can come from vehicle emissions, especially diesel, industry, kicked-up road grit and soil, off-road vehicles like Bobcats, and natural sources. U of L cardiologist Dr. Aruni Bhatnagar, who studies the effects of air pollution on cardiovascular health, says PM2.5 can damage the heart and blood vessels more than particles or ozone.

APCD spokesman Matt Stull says that the air-monitoring site most comparable in air quality to Belknap is at Cannons Lane, dubbed the APCD’s “urban exposure site” in part because of its proximity to I-64.

Cannons Lane had some of the highest levels of ozone in Jefferson County, whose four monitoring sites showed the highest annual PM averages in the state in a 2009 Division for Air Quality report, matched only by Shepherdsville.

PM levels near Belknap may be as high or higher than the Cannons Lane site, and that’s bad news for athletes.

“The fresh emissions are more dangerous than the aged emissions,” Bhatnagar says. “People living next to the road have much greater risk of heart disease than people who live further off. So that’s long-term risk. For the short-term risk, the traffic pollutants have high toxicity in that if you’re exposed to that, it could compromise your lung function and trigger asthma or breathing capacity (problems).” Of particular concern to athletes is that PM causes vessels to constrict, reducing the muscle’s blood supply.

Athletes who spend only part of their practice time outdoors still risk exposure, and single-day spikes in air pollution can be dangerous.

“Over the years, people have shown in many, many studies that if you had spikes of air pollution, this was followed six hours, 12 hours, 24 hours (later) in a spike in cardiac deaths,” Bhatnagar says.

Many U of L athletes come to the city from remote areas with lower levels of air pollution, but “if you’re coming from a very clean place, you could be even more sensitive,” he says, because your body is less accustomed to dealing with the extra strain. This group may start feeling the overarching effects of PM2.5 exposure after only a few weeks, says Bhatnagar, who points out how many teams were concerned about spending only a few weeks in Beijing during the 2008 Olympics.

One thing on U of L’s side may be the wind, which blows to the northeast and therefore passes over U of L facilities before crossing the expressway. The new Trager practice facility will also provide many teams with the option to practice indoors.

But when you look at the bigger picture — that big picture being a map of the United States — it appears that no Louisvillian can avoid a hefty daily helping of particulates. Natural wind patterns draw air pollutants from Chicago, New York City and other large cities to the northwest and northeast down to a basin that includes the Ohio Valley, Ohio, West Virginia and Eastern and Central Kentucky.

As a result, the region’s PM2.5 concentration is one of the highest in the country and the world. Maps of premature deaths attributed to PM exposure show a similar red blemish smearing the Ohio Valley region, with Louisville teetering right on the western edge.

If that sounds scary enough, don’t even look at a world map. “If you see from outer space, you see two or three hot spots,” Bhatnagar says. “One would be the whole Beijing-Shanghai complex, maybe Delhi, and then you see the Ohio Valley, and then you see California.”

The type of particulate matter in the United States is of particular concern. “If you go to Beijing, you see a lot of dust, and it smells horrible, but that’s all PM10, and that’s easily removed from upper airways,” he says. “What we have here are ultra-fine particles that you don’t see, and look clean, but it’s really much more deadly.”

Asked whether Midwestern sports teams feel the affects, Bhatnagar barely hesitates. “I think in performance, yes. … When you exercise, you tear up the tissue, and you need to have it repaired, and so if you are constantly being exposed to pollutants, then you might compromise your repair.”

With football, field hockey and soccer seasons underway after Louisville’s hottest summer on record, it’s worth it for athletes to take a few precautions. Michelle King, of the APCD, suggests coaches and athletes limit practice times to the mornings, when ozone levels are at their lowest, especially during air quality alerts. Bhatnagar suggests sitting out the morning and afternoon rush hours, and even practicing after a rainfall, when a great deal of PM has been washed away.

Bhatnagar also suggests that local newspapers publish projected PM levels every day alongside the weather report, as many European papers do. “Knowledge is power. We need to know when these levels are high, and we need to avoid them.”

Like discussions about Coach Strong’s legacy or the likelihood of finding a parking spot downtown during a basketball game this winter, whether UK’s win can be attributed to the cleaner-air advantage is still a matter of speculation. But it’s now an open question whether the home-team advantage depends on where you call home.