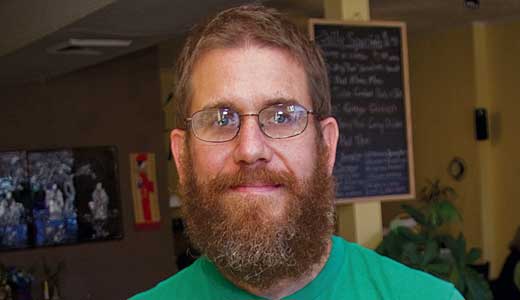 Todd Brashear is a familiar face in the Highlands and an even more familiar voice everywhere else. The owner of Wild and Woolly Video (home to possibly the largest collection of Russ Meyer films this side of Roger Ebert’s personal library) once played bass in the Louisville punk band Slint, but that was a long time ago. Now he’s married and raising a family and works civilized business hours — but that doesn’t mean Brashear has gone soft. In fact, quite the opposite.

“I would say my go-to, last meal, end-of-the-world dish would be the avocado rolls at Lá Quê, the Vietnamese restaurant next door,” says Brashear.

“In the past, I used to be pretty big, and I guess since the last seven or eight years, I’ve changed my health habits, so it’s nice to have good food,” he says. Since he started hanging out at Lá Quê (pronounced “La Whey,” or, as he jokingly calls it, his other office), Brashear has virtually eliminated high blood pressure and high cholesterol. “I had bad allergies, and now I almost never take allergy medicine,” he says. “Some days it’ll get to me, but I don’t worry about high blood pressure anymore.”

Lá Quê owner Hin (“Hahn”) used to run the restaurant’s prior incarnation, the Lemongrass Café, before relatives took it over. After that, says Brashear, it wasn’t as good, and with Lemongrass in subsequent decline, Hin returned in 2008, changed the name and rebuilt the restaurant’s following. “I’m pretty sure even back when they were Lemongrass Café, they had (the rolls),” Brashear says. “They also have really good string beans and pho ga” — the basic but satisfying Vietnamese noodle soup. “But it’s rare I go there and don’t order the rolls. When I don’t get it, they look at me a little funny.”

Besides running the store and his WFPK radio gig (Brashear presents a weekly movie review segment on Laura Shine’s afternoon program), the video-loving vegetarian is on the Keep Louisville Weird board, but he doesn’t think movie snacks need to be weird as well. Popcorn, he believes, is still the best snack for watching a good flick (or a bad one, for that matter), and Wild and Woolly stocks not only garden-variety buttered popcorn to-go but, appropriate to the tenor of his video store, locally produced cult favorite Kenny’s Gourmet Popcorn.

Yet despite the easy access to popcorn, Brashear reaches for Lá Quê every time. “Anytime people ask, ‘You want to meet for lunch,’ I say, ‘Let’s just go next door,’” he says. The folks at Wild and Woolly are happy to be good neighbors; in fact, Brashear has even retrofitted his car to run on the restaurant’s discarded vegetable oil. “Hin is great,” he says. “People say I’m nice, but she’s super nice. It’s a win-win all the way around.”