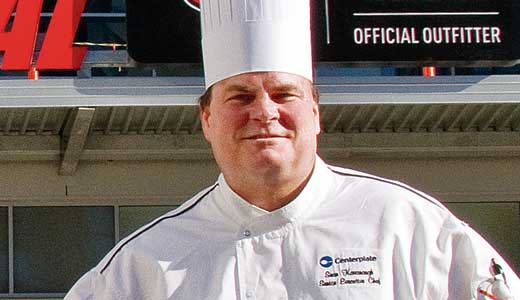 Guess who’s coming to dinner — repeatedly — at the freshly minted KFC Yum Center, which opened with fanfare in downtown Louisville on Sunday? Only about 22,000 rabid fans for each sold-out event. So who’s going to feed this crowd? Sean Kavanaugh, that’s who.

At 45, Kavanaugh is already a 25-year veteran of hotel, convention center, sports stadium and arena cuisine. He comes to Louisville (along with his wife and teenage daughter) by way of the University of Phoenix Stadium, home of the NFL’s Arizona Cardinals, where he held the same title: Centerplate Senior Executive Chef of Sports and Entertainment. (Bonus: He won’t have to change the colors of his sports regalia.) Locally, Centerplate provides food and beverage service for the Kentucky International Convention Center, the Kentucky Exposition Center, Louisville Slugger Field and Papa John’s Stadium, as well as the new KFC Yum Center.

Growing up in Ft. Myers, Fla., Kavanaugh’s kitchen experience began at the tender age of 11 at the knee of his sandwich-shop-owning uncle. “Uncle Bob would bring people back in the kitchen to show them how fast I could cut peppers and onions. I was totally doing it wrong, but I was fast,” he remembers. Later, he scored a dishwashing job at a fine dining restaurant, fell in love with the business, and rose quickly through the ranks despite still being in high school — eventually working every position in the restaurant.

Kavanaugh continued cutting his culinary teeth at the five-star Ritz-Carlton Naples and was promoted to Executive Chef of the Ritz-Carlton in Phoenix the day before his 25th birthday. “And I’ve been growing ever since,” he tells LEO during the Center’s pell-mell pre-opening week.

LEO: When I told him I was interviewing you for an article, a friend of mine said, “But, is he a real chef?” I laughed, because I know the answer, but I’ll let you answer. Are you?
Sean Kavanaugh: Yes. I would consider myself a “real” chef. I even have a long list of “real chefs” now that have worked for me and progressed greatly in their careers. I plan the same kind of success here in Louisville.

LEO: How many food outlets will there be at KFC Yum Center?
SK: We have 26 concession stands including KFC Yum, Papa John’s, etc., and 21 portable stands (food carts) — within a total of 236 points of sale for the guests, including 75 luxury suites.

But don’t fret if you’re not going to be ensconced in one of the swanky suites. General ticket holders will still have a tasty array of dishes to choose from at the public concessions. The “Louisville Hot Brown Dog” is topped with roast turkey, local bacon, tomatoes, Mornay sauce and parmesan. The “Ale-8-One Burgoo Poutine” features hand-cut double-fried french fries covered in beef burgoo and fresh cheese curds. And there are crepes — crepes! — both savory and sweet, with a dazzling choice of fillings. When’s the last time you could get a bourbon-caramel apple crepe at a Cards game?

LEO: There are some high-profile concerts and events on the Center’s calendar in the coming months, including Lady Gaga, Dane Cook, My Morning Jacket, the WWE and Justin Bieber. Are you excited? Do you have to deal with backstage riders and meal catering for the headliners and their crews?
SK: Yes, I am very excited, and we will be doing food for backstage, crews and anything else required. My wife and daughter are especially excited about Lady Gaga. Ooh la la!

LEO: What is your philosophy — your vision — for this monumental task you’ve undertaken?
SK: Centerplate’s philosophy is to create “Craveable Experiences, Raveable Results.” My vision here is to set the new industry standard for food and beverage in stadiums and arenas.

LEO: I suppose you’ve heard that some people think the new arena physically resembles a toaster oven. What do you think about that?
SK: My last gig looked like a space ship in the desert. To those folks, I would just say, “Come see what’s cooking in the toaster oven!”