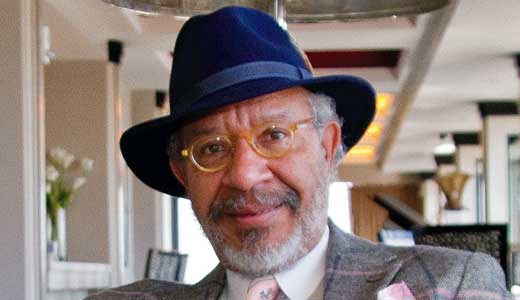 Ed Hamilton’s sculptures are all over Louisville and the nation, notably the “Spirit of Freedom” African American Civil War memorial on U Street in Washington, D.C., and the new Lincoln Memorial at Waterfront Park downtown. As with his visual works, the artist himself often is found downtown, or wherever beautiful things can be seen — and tasted. “My wife (Bernadette) and I have several dining places we absolutely love: Buck’s, RIVUE, 21c, Proof and Jeff Ruby’s,” he says. And although he and Bernadette have shared many wondrous moments over the decades, Hamilton recalls one that remains frozen in time.

“I guess if you really want a memorable meal, it would have had to been at Windows on the World the night before” — Windows on the World being the famed restaurant on the 106th and 107th floors of the North Tower of the World Trade Center, where the couple dined on the night of Sept. 10, 2001. “We were in New York for a competition to create a memorial for Pee Wee Reese and Jackie Robinson, and we got there on the 10th, and we were to present our proposals in the morning,” he says. Having had lunch at Windows on the World earlier that summer along with the other artist-candidates, Robinson’s daughter and widow, Reese’s widow and several Brooklyn-era Dodgers, Hamilton asked the hotel concierge to make a reservation for that night so his wife could also enjoy the view. “She’d never seen the World Trade Center up close and personal. We had dinner and saw the clouds go by, and it really is a window on the world,” he says, falling into present tense. “You can see forever if it’s clear.”

The tranquility continued throughout the evening. “(The servers) were at your beck and call. You didn’t want for anything, and drinks were flowing,” Hamilton recalls. “Little did we realize the next morning when we woke up … My God, what if we hadn’t gotten the reservation and we’d gone there for breakfast? If that (meal) had been the next morning …” Hamilton still wonders about those restaurant employees. “I can see a few faces that were there, waiting on us, and yet I don’t know whether they were in the building that morning, preparing for breakfast or lunch. It’s something that haunts me.” (The decision regarding the Robinson-Reese monument outside Brooklyn’s MCU Park, which got postponed six months because of the attacks, ultimately came down to Hamilton and William Behrends, with Behrends being awarded the commission.)

The Hamiltons continue to celebrate the various occasions and milestones in their life together. For their 40th anniversary three years ago, Hamilton selected a “wonderful” antique ruby-diamond ring for his bride — while 25 represents silver and 50 means gold, 40 is commemorated as the “ruby” anniversary — and made reservations at RIVUE, where he presented the ring as daughter Kendra looked on. “We had lamb chops, scallops, plenty of martinis, champagne,” he says. “It was a memorable event. Dining, the ring, life …”