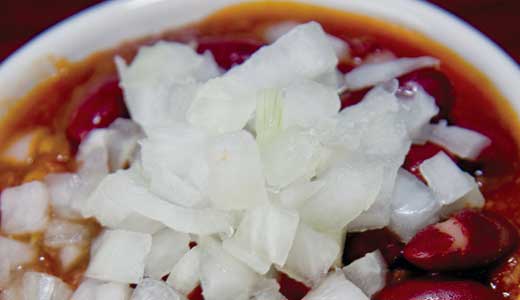 It’s tough to understand chili; there are so many different forms of the stuff that it’s nearly impossible to keep track.

For instance: True Texas-style chili has no beans in it, just beef and chili peppers, while chili con carne (translated as “chili with meat”) has both meat and beans. Heck, some chili is completely sans-meat, making beans the main ingredient. There’s also white chili, with chicken and white beans, made famous locally by Timothy’s Bar and Restaurant.

There’s even Colorado green chili, made with pork and lots of (you guessed it) green chiles. Of course, Cincinnati-style chili is used primarily as a topping for spaghetti or hot dogs, making it more like a really hearty condiment, while good old Louisville-style chili typically has the spaghetti cooked right in, complete with big chunks of tomatoes and onions.

The good news is that if you settle into the couch on a fall afternoon with a good book or a good football game on the tube, any of these and other variations will warm your belly and soul quite effectively. There’s a recipe for Louisville-style chili on GroupRecipes.com, and the poster noted, “Chili is never wrong, just different.”

Well said. But really, what is it about chili that makes it so enduring, and in so many forms?

“Chili has a historic and cultural significance and can be considered an indigenous American tradition,” says Janice Miller, executive director of the Chili Appreciation Society International. (I’m not making this up.) “Chili is one of the original American dishes made over campfires during cattle drives.”

Her organization sponsors and regulates chili competitions and judges chili based on color, aroma, consistency, taste and after-taste. Oh, and fillers like pasta, beans and rice are not acceptable. Just so you know.

Less than a century ago, Texas saw the creation of so-called “chili joints”; the concept spread, and a couple of notable such establishments in Louisville were the Chile Bowl on West Broadway, which dated back to WWII, and the Old Walnut Chile Parlor, which actually dated back to the 1800s and closed only in recent years.

What we’ve had in recent years is, well, Skyline Chili (based out of Cincinnati) and a variety of restaurants at which one can get chili, albeit with mixed results. Sometimes it’s homemade (hard to beat the Back Door, Bluegrass Brewing Company, Rush Inn and even T.C.’s Sandwich Shoppe downtown, among others), and sometimes it’s straight out of a can (see: Steak ’n’ Shake).

But about nine months ago, a new “chili joint” emerged from the ashes, called The Chili Pot. Owner/chef Cathy Reid tried to obtain a Gold Star franchise at her boyfriend’s request, but ultimately launched her own chili restaurant and catering business at 8118 Preston Highway based on her own recipes for four different chili styles: Louisville Chili, White Chicken Chili, Green Pork Chili and Sirloin Steak Chili. They’re all chili, and you can get a small serving of your choice for about $3 or less. Or, you can get a gallon for the family.

The Louisville Chili at Chili Pot is inherently sans spaghetti but contains the familiar ground chuck, tomatoes and onions, along with a blend of dried peppers and spices. You can add the familiar pasta and/or red chili beans on request.

Meanwhile, the White Chicken Chili is fairly traditional and served with Monterey jack cheese, and the Sirloin Steak Chili harkens to Texas-style, with chunks of steak, onions and tomatoes. The Green Pork Chili may be the most interesting of the lot, featuring dry-rubbed and slow-roasted Boston butt, along with Italian sausage, tomatillos, onions, chicken stock and the signature Chili Pot spices.

So let’s ask the local expert: What is it about chili that makes it so damn enduring?

“It’s comfort food,” Reid says. “It’s warm and filling, and it will stick with you. You put a little spice in it, and it warms you up. I think it’s also a psychological thing.”

When you think about it, chili on a cool autumn day is like chicken soup would be to a cold or flu. The only force that might stop this kind of phenomenon would be global warming.

Reid says the Louisville-style is her best seller, followed by the Green Pork Chili, which started off slowly when she opened nine months ago. “I couldn’t even get people to taste it at first,” she says, “probably because of the words ‘green’ and ‘pork.’”

But the Louisville Chili is, as she puts it, “what our moms made if you grew up here.” As for making the spaghetti and beans optional, she notes, “People from further north or south (of Louisville) just don’t get it.”