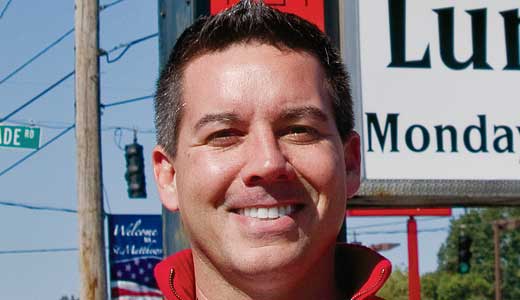 Asked to name his favorite meal in Louisville, author and U of L professor Brian Leung responds: “This kills me. It’s a dead-even tie between the gai lan at Oriental House and the pulled pork sandwich with a draft beer at Frankfort Avenue Beer Depot. What’s a boy to do who’s both white and Chinese?!”

Oriental House and the Frankfort Avenue Beer Depot (FABD) may seem worlds apart, but the two choices hint strongly at the writer’s personal history. Leung’s mother, a native Missourian, mastered the style of green beans and ham hock that’s so soft that chewing becomes redundant. (Not unlike the green beans you’ll find on FABD’s sides menu.) Then there’s Leung’s father, who has run a Chinese restaurant in Southern California for 30 years. This may account for his son’s taste for gai lan, a bitter, almost tangy Chinese broccoli often served with oyster sauce.

Leung says the seemingly disparate restaurants inspired similar first impressions. The unfortunately named Oriental House with its super kitschy, tacked-on facade was something of a curiosity. Despite low expectations, the spot was too compelling to pass up. Upon entering, though, Leung’s hopes were raised when he noticed a room full of
Chinese patrons.

While being seated, Leung, who describes himself as Caucasian-looking, was handed the Western menu. He sensed that a true Cantonese bill of fare was being kept from him, so he requested it. “I was like, ‘No, I know there’s another (more authentic) menu.’ I just knew there was, because all those Chinese people wouldn’t have been in there.”

Similarly, Leung didn’t expect much from FABD, based on appearances alone. The roadside structure’s décor can be fairly described as biker-bar-meets-frat-house, with much of the cooking done right on the parking lot. This creates a tailgate party ambience, especially on game days.

But as anyone who has driven down Frankfort Avenue can tell you, there’s no better advertising than the aroma emanating from FABD’s two large smokers out front. Much like Leung’s experience at Oriental House, curiosity finally got the better of him. He decided he had to go in, and he discovered what he describes as a comfortable, unpretentious place that lets the food speak for itself.

Leung has been in love with the pork at FABD ever since. But does it beat the gai lan at Oriental House? “Draft beer and a pulled pork sandwich — I mean, that is like heaven. But, if I had to chose one, I don’t think I could.”

Leung’s third book, “Take Me Home,” was published by Harper Collins and released on Oct. 5. This historical novel follows the relationship of a white Wyoming homesteader and a Chinese coal miner, circa 1885, with the real-life massacre of Chinese coal miners in the region providing the backdrop. Leung will read from his novel on Saturday at Carmichael’s Bookstore on Frankfort Avenue (free, 4 p.m.).