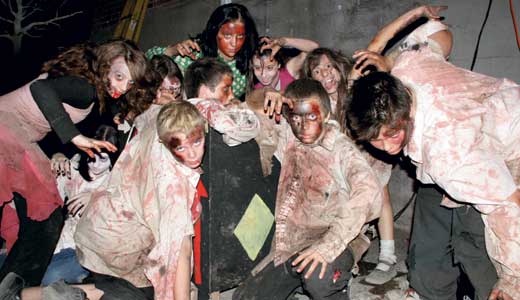 Lately, it seems, turning a corner to find a magically appearing throng of dancing zombies has become nearly normal. And that is almost comforting. For one thing, they’re too focused on shaking their tattered groove thangs to be eating brains, and now we know that, yes, Michael Jackson does still live, and, thank goodness, he found his red jacket. Have you experienced this spectacle, perhaps at the Louisville Zombie Attack, a random Halloween parade, at Waverly Hills, or in the alley next to the Baxter Avenue Morgue? Who are these creatures crawling in search of blood, terrorizing your neighborhood?

The dancers who keep resurrecting the famous “Thriller” choreography are members of the Terpsichore Dance Company, a local nonprofit troupe founded by Carolyne Tilford in 1999. The company is active year-round, offering free dance classes in every style from ballet to hip-hop, to dancers of any age and experience level. Halloween is their busiest time, though, as they splatter themselves in blood night after night, making appearances all around town. Their home base is the Baxter Avenue Morgue, where they dance all night to entertain people waiting in line, rotating “Thriller” with a few other spooky numbers. Celebrating their 10th year at the Morgue, Tilford and the dancers of Terpsichore reflect on how one small opening act exploded into a famous tradition.

“We were artists in residency down at the Kentucky Theatre,” Tilford explains. “And we did this to open a ‘Dawn to Dusk’ performance, because it was an old movie theater and ‘Thriller’ starts out in a movie theater … It’s taken off into the most insane thing ever. It was never, ever anything but a fluke performance.” They were then invited to perform the dance at the Morgue, and have been a permanent installment ever since, performing on Friday and Saturday nights during September, and then adding Thursday and Sunday as Halloween approaches. The dancers don’t get paid, and since a lot of them are kids, it means they’re out late on school nights. That doesn’t stop them from coming, though — anywhere from about 15 to 45 of them show up to dance, depending on the business of the night.

According to Tara Bensing, an instructor and longtime group member, “Everyone loves ‘Thriller.’ You always get the crowd that’s excited, and the people are like, ‘Oh my gosh! You know ‘Thriller’? Can you teach me?’ It’s just fun. I love to dance. It’s my favorite form of exercise — the only form I’m willing to do for hours on end without stopping.”

The dancers act out Jackson’s 1983 video, playing the roles of the zombies, led by a dancer playing the Jackson role and another as his girlfriend. Several dancers switch off to play the lead role, including 22-year-old Meghan DeVore, who has been with the company for 10 years. The Morgue is her favorite place to perform, and even though she’s a veteran, she still studies the famous 14-minute video often.

Merwin Stevens, who is new to the company, loves embracing the zombie character, even between dances. About 15 minutes before performing “Thriller,” he usually takes a position against the wall and holds very still.

“You have people coming though the line going, ‘Is that like a mannequin?’” he says. “And, of course, you have a few idiots who throw rocks at you, and you don’t move. So when the music comes on, and you stand up, they shit themselves.”