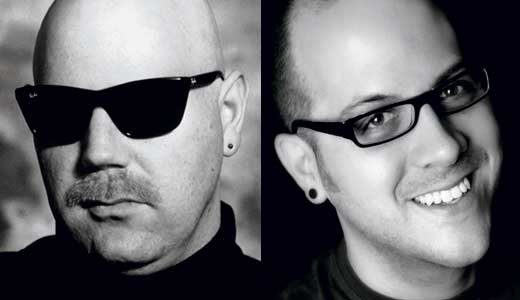 We live in a very old city — a fact that has had generations of Louisvillians passing local ghost stories beneath bated breath and nervous whispers for more than 200 years. Whether it be ghoulish tales of famous spirits like Al Capone, or unknown apparitions whose names have been long lost to time — our city’s local lore often finds itself exploring the unexplained (and if you don’t believe me, read one of the several books written on the matter).

“I’m the Halloween side of the ‘Paranormal Comedy Show,’” says Reese, the 6-foot-6 former pro football player turned stand-up comic. “I’ve always been fascinated with horror movies and science fiction — even when I was too young to watch them, I would watch through my hands, peeking through my fingers.”

“It was just a general curiosity of ‘what happens after we die?’ Or ‘is there something else out there?’” says Brody, who will perform alongside Reese this weekend, of his interest in the field. “I never had any ‘incidents’ growing up … that would’ve been cool and scary.”

While it would’ve been scary as a child, as an adult, Brody has not only become the official comedian for Sci-Fi Network’s “Ghost Hunters” series, but he has done some real life ghost hunting himself. “I’ve hunted the Baxter Avenue Morgue in Louisville,” he says. “We didn’t see anything; it was pretty dead that night … no pun intended. But I haven’t been to Waverly Hills yet, which is the big one there, of course.”

At first the juxtaposition between terror and humor may seem a little jarring. “On the surface, I would say there’s no connection,” Brody says. “But I guess they’re both surprises. When you laugh at a punch line you didn’t see coming, and you get scared at someone you didn’t see coming — it all begins to look the same.” In the end, their brand of paranormal comedy is two guys talking about what really interests them, a sign of honesty that marks great comedians.

“I can’t imagine anything worse than being a comedian for as long as I have, and having no discernable style,” Reese says of his subject matter. “Just a faceless joke machine.”

And if this seems like a seasonal act for these two, you’d be dead wrong. Both men perform their alternative brand of comedy year-round, taking it mostly to conventions for paranormal enthusiasts and horror film junkies. “‘The Exorcist,’ ‘Close Encounters of the Third Kind’ and ‘Jaws’ were the movies that scared me most as a kid,” Brody says. “Those were pretty formative years, so sharks, aliens and ghosts are the three things that I’ve been obsessed with my whole life.”

“With the internet,” Reese adds, “people with similar interests all over the planet are meeting through Facebook, forums and chat rooms — those are amazing assets for people with very specific taste.”

And if you’re still not exactly clear about what might be in store for you at the Paranormal Comedy Show this weekend, Reese sums it up: “With Mike and I on a show, if you’re kinda bored of the regular stand-up, the happy-sweater-guy who goes, ‘Oh, my girlfriend and I just broke up’; if you want an antidote to that, this is the comedy show for you. If you’re looking for something different, you’re going to find it here … trust me.”