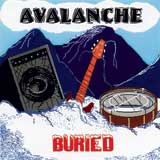 Buried, the new album by Avalanche, is one of those records that makes you feel like a dick for not liking it. They tried to write some Rolling Stones and AC/DC songs, and even took special care to dedicate them to fast cars, women and rock ’n’ roll. What’s not to like? Well, here’s where we start to sound dickish. If you’re going to mine classic rock but dig no deeper than The Rolling Stones and AC/DC, you’d better fucking rule. There are a million Bon Scott and Mick Jagger wannabes out there, each a million miles from touching Bon Scott or Mick Jagger. Buried never elevates Avalanche beyond bar-band status, and even then, things are a little shaky.