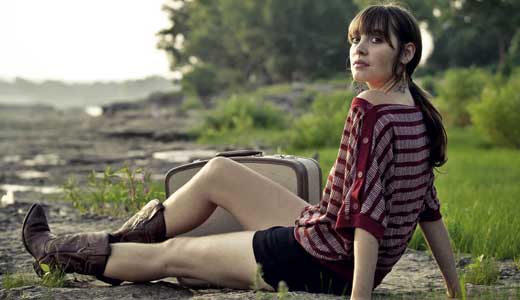 Cheyenne Marie Mize is donating the proceeds from “Over The Moon” to Norton Healthcare's Music Therapy Fund.

In a sense, Cheyenne Marie Mize has been building up to Saturday night for a number of years. The material off her solo debut, Before Lately, which is released nationally this week via SonaBLAST!, remained dormant in varying stages while she added to her musical résumé: a recurring member of the roots troupe Arnett Hollow; fiddle player and backup singer to current folk hero Bonnie “Prince” Billy; utilitarian on Ben Sollee and Daniel Martin Moore’s last U.S. tour; and one piece of old-time triple threat Maiden Radio.

In recent months, Mize has enjoyed some well-deserved me-time. She’ll briefly join Olof Arnalds, the Icelandic singer who has collaborated with Sigur Ros and Bjork, before a nationwide trek opening for Johnny Flynn, and her new video for “Friend,” filmed at The Seelbach Rathskellar, is out now.

Mize is a music therapist at Norton Audubon Hospital, and earlier this month, via her Bandcamp site, she released the song “Over The Moon,” which she performed with Maiden Radio. Proceeds from the sales go to benefit Norton’s Music Therapy Fund.

LEO: What is it like to finally focus on your own material rather than serve as a Swiss army knife for everybody else’s projects?
Cheyenne Mize: It’s exciting in that I get to kind of call a few more of the shots, but with that comes more of the responsibility and anxiety related to that responsibility. In general, it’s nice to be able to have a little bit more control over what I’m doing.

LEO: Over what period of time did Before Lately come together, and in what manner did it take shape?
CM: It’s a long time coming. Some of the songs I had written years ago, and others came more recently, some even right when I was starting to record. It was really a combination and, again, the way that they take shape — it’s always different, sometimes it’s a musical idea that I get, and I end up finding words for it later. Sometimes it’s more of a complete idea: Lyrics, melody and the song all come together.

LEO: You’re donating the proceeds from your new song, “Over The Moon,” to benefit the Norton Music Therapy Fund in Louisville. What does this fund do, and why did you decide to do that?
CM: I’ve been working for Norton Health Care for the past five or six years now. That fund goes to support all of the different music therapy positions in all of the Norton hospitals. Since I’m not able to devote as much time to music therapy, I thought this was a good opportunity to stay involved with that and get some help their way. Really, it doesn’t take much money for us to do a lot with it. We’re hoping to raise money for a project that we wouldn’t be able to do otherwise.

LEO: How did you fall into that line of work?
CM: I found out about music therapy my senior year of high school. I’d never heard of a way to work with people and do music at the same time. Thought it was worth giving it a shot, and the more I got into it, the more I realized that’s exactly what I wanted to do and couldn’t imagine doing anything else.

LEO: What were you going for in terms of arrangement and style on Before Lately?
CM: I don’t know that I had any musical goals when I started. I’d never recorded any of my own music, and I just wanted to do it for me. With my music, it’s conveying an emotion, setting a mood or an atmosphere, and using all aspects of the music or instrumentation to create that (mood).

LEO: You debuted some newer material at Boomslang in September. Any songs brewing, and what are they like?
CM: I’ve got a whole slew of songs just waiting to be recorded, but it’s gonna have to wait for a little while. I hope to get back into the studio this winter. It’s all over the place, as usual. I have so many musical influences, it depends on my mood.