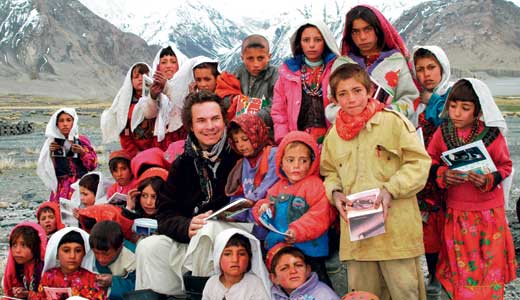 Greg Mortenson, the philanthropist who brought a personal missionary zeal to schoolbuilding in Pakistan as recounted in the bestseller “Three Cups of Tea,” is coming to town to speak about his follow-up volume “Stones into Schools,” which is just out in paperback. The Tuesday talk at the Main Library has limited seating — you may want to call 574-1611 to get status on availability.

In the last few years, Mortenson has attempted to build on his achievements — this time, in war-torn Afghanistan. His Central Asia Institute (CAI) emphasizes education for girls, which meant there was sure to be conflict with elements of the Taliban and similar groups. But while more than 2,400 schools in Afghanistan have been shut down since 2007 — 75 percent of them girls’ schools — none of CAI’s 165 schools has met that fate. When asked to account for this success, the author tells LEO, “I think it’s because the community has to match. We supply skilled labor and materials like rebar, but the community has to supply basic resources like water, and they have to commit 5,000 to 8,000 hours of manual labor. I think the Taliban is hesitant to destroy something the local community has that much investment in.”

Because his group is a significant presence in rural regions rife with militant groups, Mortenson also has to consult and work in cooperation with the U.S. military. He’s a clear-eyed pragmatist when looking at our presence in the region, but he seems optimistic that we’ve learned in recent years how to work in alignment with the region’s communities to bring about jointly desired improvements. “Admiral Mullen (chairman of the Joint Chiefs of Staff) gave a speech last year — in Louisville, in fact — that shows that he ‘gets it.’ The essence of what he said is that there is ‘no military solution’ in that there is now no solution in Afghanistan that is only military.” But Mortenson is still concerned that “we ask our soldiers to be three things: warrior and diplomat and humanitarian.”

He’s not stopped his own humanitarian efforts in Pakistan, a country that has many ongoing problems with infrastructure and politics — and this year, with a major flooding disaster. “Our efforts after the flood were in primarily rural areas in northern Pakistan. We set up tent schools within relief camps. We also provided some basic supplies like flour, water, etc. These are often supplied by other organizations — but we want kids to keep going with their schooling. In the camps, kids have a lot of downtime, and the militants often take advantage of that.” It’s this level of political awareness, combined with his commitment and his ability to assemble resources and cooperative teams, that makes Mortenson a rare individual.

He’s also a communicator who wants to keep improving. “Three Cups of Tea” was written with a collaborator, and after fielding many requests for additional information, Mortenson was ready to take on the next step to becoming his own Boswell. As a result, the new book comes across as more directly personal (it’s written in first-person) and directed more at showing how others can follow Mortenson’s lead and make positive changes.