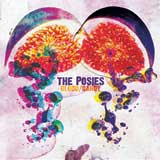 Jon Auer and Ken Stringfellow used to fill out the band when Big Star put on reunion shows. After the unfortunate passing of Alex Chilton, they can get back to their own reunion shows. (The Posies supposedly disbanded in the late ’90s, but this is the band’s third release since then.) Here their latest incarnation delivers consistent tight tracks with densely layered (but not leaden) production. The general tone is sardonic: Their reaction to seeing a new dawn isn’t warm and fuzzy, it’s I’m ready to trade my darkened eyes for the glitter prize. Homage to John Lennon can run thick at times, but the Posies still pull off a snappy mini-Abbey Road in four minutes (“Licenses to Hide”). The many little moments of attitude help compensate for arrangements and sequencing that are so deliberately tasteful as to be almost counterproductive — rhythms roll, then chop, then bounce with predictability. Knowing when to up the smarts and add in the edge is part of what makes a successful alt-pop act, and The Posies are still in the know.