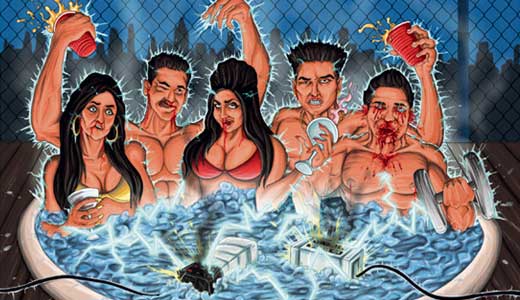 Well, thanks for the warning, Dick, but it is too gross to look away. Click after stomach-churning click, I was repulsed, shocked, amused, squinting, turning away and showing it to anybody nearby. It’s appealingly unappealing. Whether it’s kids in peril or decapitated celebrities, Starr is frightfully good at his craft.

The artist who hails from Hawaii has made Louisville his home. He moved here at age 16 and left after two years to attend the Savannah College of Art and Design in Georgia. He had options after graduation but came back here. “I like the local feel,” Starr says. “It’s a city, but it still has a small-town feel.”

And Louisville likes him back. Prints of Starr’s artwork can be found in galleries and stores like ear X-tacy, Ultra Pop and Roll of the Die at affordable prices. “It makes my work more accessible,” he says. “Not everyone can afford a hand-drawn original.” True, true.

Starr has drawn nationwide attention as well; fame catalyzed from his “Celebrity Death Poll,” in which he fabricates outlandishly macabre slaughter scenarios for obnoxious celebrities. It started as a lighthearted survey on his website, www.dickstarr.net with a simple question: Who do you want to see die? “Paris Hilton won by a landslide,” Starr says. Seem a little messed up? It is. But after talking to the guy for mere minutes, it is clear: It’s all a big joke.

Starr’s preoccupation with the horror genre came about innocently enough. It was a dark and stormy night, and all through the house not a creature was stirring, not even a mouse — nah, he broke his leg. To pass time in the hospital, Starr’s father brought the film “An American Werewolf in London,” which prompted the other kids in the ICU to explosively drain their bowels from fear. For Starr, it was the beginning of a dark and beautiful friendship.

He would draw demented scenes while other kids drew rainbows. He cites a picture his mom found of Superman flying through the air with his head severed by a wide-spanned bird. I asked if his parents thought he was going to be … OK — “Oh yeah, I was never a violent kid. I’ve always been one of those get-it-out-when-I-draw kind of guys.”

That shtick is key to his success. Where a good chunk of his art toes the line of absolute repulsion, dead celebrities draw people in. “They see my ‘Freddie Jason,’ and they’ll be like, ‘Oh, hey, that’s hilarious,’ and then look to the left and see blood and guts, then walk away. The dead celebrities really put me on the map.”

And Starr is far from a one-hit wonder. Aside from his successful death poll, he frequently freelances album covers and tattoos. He and the editor of Girls and Corpses have also discussed doing a grisly coffee-table book of his published “Celebrity Death Polls” accompanied by his expositive narrations.

Interestingly enough, he’s working on children’s books under the pseudonym “Skip Magnificent.” Gore and guts are good and fun for the older crowd, but he wants something that was appealing and appropriate for a younger demographic. “I have a young niece and nephew, and they can’t look at this stuff,” Starr says. “I want to be able to share this with them, and I want to inspire other kids to draw, just like I was.”

Starr’s work will be on display at Scarefest in Lexington (Nov. 5-7) and Horrorhound Weekend in Cincinnati (Nov. 12-14). For more info, visit www.dickstarr.net.