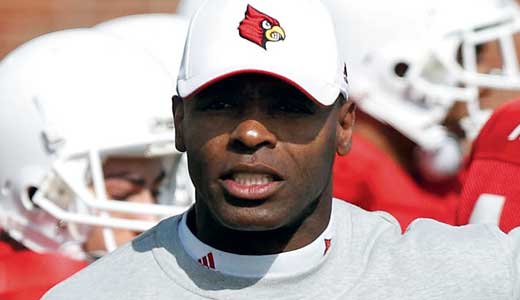 If springtime is the season of rejuvenation and frolic, then fall heralds recommitment and refocus; it’s a time that takes the measure of man.

Labor Day, summer’s traditional end, marks the kickoff of what has evolved into America’s favorite pastime.

How and why the nation turned its wandering eyes from the bucolic pastures of baseball to the thunder of headgear and the grandeur of the “Script Ohio” marching band formation that define football is a semester’s course unto itself. Suffice to say, the changeover occurred sometime after Joe Willie wrenched the pigskin planet off its axis in Super Bowl III, but way before ESPN greenlighted Brett Favre’s life into a daily soap opera.

Football is now the deal.

And this autumn, in this city, in this commonwealth, there are cultural considerations that make the season just over the horizon the most fascinating ever. Perhaps even a portent of significant social change.

Willie Taggart at Western Kentucky and Joker Phillips at University of Kentucky are alums who now lead the charges of their alma maters. Their stories are worthy.

But nothing like that of Charlie Strong, tapped to lead Louisville’s Cardinals out of the football wasteland, where it has been deposited by a coaching fraud who turned a national contender with talent and Heisman-quality leadership into an also ran.

How Strong traveled the circuitous, impediment-laden byways from the rural burg of Batesville, Ark. to the University of Louisville is not epic in the Homerian sense. But it is poetic nonetheless, a fable of fortitude and forbearance, how what is good and right can eventually prevail despite pitfalls.

When Charlie Strong was born and raised a half-century ago in Batesville, hard on the edge of the Ozarks in “Deliverance” country, it was a town of 5,000. It is nearly twice that now. Despite its small size, the town has produced its share of favorite sports sons. Like NASCAR’s Mark Martin, a contemporary of Louisville’s coach. Former major leaguer Rick Monday was born there. So too, Ryan Mallett, now the quarterback for former U of L coach Bobby Petrino at Arkansas.

As it turns out, football wasn’t Strong’s favorite endeavor as a kid.

“I loved baseball. Centerfield. But when I was old enough, I had to work in the summers at my uncle’s service station, so I switched to a winter sport.”

It is that work ethic — taking care of basic business first — that has guided Strong along his career arc.

Quarterback Adam Froman explained to Sports Illustrated’s Andy Staples that it’s not difficult to follow when you see Strong jogging and lifting weights before sun up. “He’ll get in there in the weight room, and just put 315 (pounds) on the bar and start repping it out.”

Perhaps the most impressive of stats is this: According to Strong’s bio on the University of Florida’s website, in 64 of 92 games when he was defensive coordinator, the Gators tallied points off turnovers. In 70 percent of the games, Strong’s defense scored. Stunning.

Acumen is why he’s coached in 21 bowl games, including 14 played in January. Then there are those two national titles while directing the Florida defense. In 2009’s title battle, the Gators held the highest-scoring offense in college football history to 14 points, a mere 50 points under Oklahoma’s per game average.

Charlie Strong’s leadership capabilities have been on display for years.

A decade ago, while coaching at South Carolina, Lou Holtz told the Columbia (S.C.) State newspaper: “Charlie Strong should be a head coach. He’s anxious to be, and he and I have talked about how you get a head coach’s job. I know we’re going to lose him eventually.”

Years before that, while at Notre Dame, Holtz recognized Strong’s potential and became a mentor, giving the then position coach a binder and advising him to fill it with ideas on how to lead his own team, and then take it on interviews to prove he was ready.

The problem, well documented and oft discussed, is that those interviews rarely came. When they did, many — nay, most — were a sham.

Charlie Strong is black. Strike one.

Sad to say, but true.

Strong has spoken frankly of an interview he had with a school he knew already had secretly hired another coach, but needed to feign diversity.

But Strong carried on, never whining, yet never afraid to publicly discuss the reality of discrimination. In 2009, he told the Orlando Sentinel he’d heard too many times to gloss over them the murmurings why, despite his credentials, he was being passed over.

Of one particular position at a Southern school he didn’t get, he said, “Everybody always said I didn’t get that job because my wife is white.”

But for U of L Athletic Director Tom Jurich, who hired Strong without needing to see that binder, race clearly was not a hindrance. Nor has it been for this community, which the coach says “has embraced us (he and his family) and taken us in.”

The reactions of fans have been almost unanimously positive.

“He’s everything you want in a head coach,” says one local businessman who recently purchased one of the new boxes at Papa John’s. “His football IQ is off the chart. He’s the real deal. He’s going to be very successful.”

In the classroom, he has not one but two master’s degrees.

On the field, he has been lauded as the country’s best defensive coordinator.

Naturally, he expects and has asked a lot of the Cardinals. “He works us hard every single day,” says defensive end Malcolm Mitchell. Yet there is respect. “I love this coach,” adds Mitchell.

But this stalwart man’s moment has arrived. At half past three on the first Saturday of September, with hip hop blaring and cheerleaders tumbling and fans screaming, head coach Charlie Strong will at last stride onto his own turf.

“I enjoy being captain of the ship,” he says. “But it means there’s a job to do.”

Thus, head coach Charlie Strong will savor the moment but be focused. Knowing he has traveled a long route through many detours to the stadium, he will be ready.

Rebuilding the House of Cards