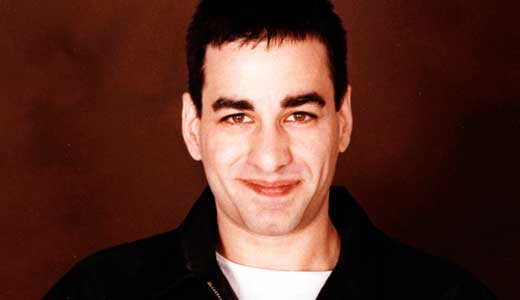 Mitch Fatel has one of the freshest, most unique voices in comedy. From the stage, he projects a soft-spoken naiveté so his off-color jokes don’t seem quite as off-color. “I never really wanted to grow up, so what I am onstage kind of personifies the most innocent part of me not wanting to grow up,” Fatel says. “I think that’s what a lot of people should be doing on stage — accessing their inner child.” His DVD, “Mitch Fatel Is Magical,” is still a best-seller on Amazon, and his album, Miniskirts and Muffins (which he says is his favorite of all his work), is still a best-seller on iTunes. After appearing on satellite radio, Comedy Central and every other major media outlet, Fatel is returning to The Improv this weekend.

LEO: You’re playing The Improv here, and you’ve played it before. Do you like that room?
Mitch Fatel: Yeah … I love the room. As a matter of fact, I’m looking forward to doing it my second time now, because the first time I was actually practicing for my (Comedy Central) special, so I couldn’t do my full regular show. So I’m excited to do my full show back at the room.

LEO: Did Louisville audiences respond well to your brand of comedy?
MF: Yeah, they loved it, and I had a great time. It was fun for me because it was the first time I had gone to some of the different clubs around the Bible Belt to see how I did. It was fun to see how they responded to my material, and I was really, really excited.

LEO: I understand you’ve been living the rock star life of a traveling comic.
MF: I’ve been doing it for the last 10 years, now … but that’s why I got into comedy, is to get the girls. And luckily some fun stuff has been happening to me over the past few years.

LEO: So things are working out then?
MF: Yeah, things are going good. I’m glad I didn’t go into business with my dad, put it that way. Chicks love the funny guy, not the guy doing investment banking with their dad … so I’m glad I followed my heart.

LEO: Growing up, who made you want to do comedy?
MF: From a very young age, I knew that when I did make the girls in school laugh, they liked me. I was not very good at sports or anything, and so I had to find another way to get girls to like me. And I noticed when I made them laugh, they always wanted to be my friend, so I knew early on I was good at that, and that was the way to be popular. My whole childhood I just wanted to be popular, and that was my avenue, so I just went a long with it.

LEO: Your stage persona has a very childlike quality to it. How did you find how that’s what people respond to?
MF: I didn’t ever really work on a persona. I was on stage, and that’s who I was on stage. I never set out to do anything. I think that that’s a little more pure Mitch Fatel. I love women. I am in awe of women and in awe of sex. And I love the art that is sexual relations. It’s my inner-pervert. And I think everybody, as you grow up, has to take on certain responsibilities and behaviors because you have to be in the real world. I never really wanted to grow up, so what I am on stage kind of personifies the most innocent part of me not wanting to grow up. I think that’s what a lot of people should be doing on stage, accessing their inner-child.

LEO: You used to work for “The Howard Stern Show” as an intern. What was that like?
MF: That was an amazing experience because Howard was my idol growing up. Working for him, he always told me I was funny. And unlike a lot of other people who had been on that show, he actually told me I was going to make it. He said, “You’re really funny, if you stick with it, you’re going to become famous.” And I really, really appreciated those words — they stuck with me forever, and they got me through the hard times. It was one of the most amazing experiences to be told by one of your idols that you were talented.

LEO: Is it important for you to be on the road, or does it get to be a paycheck?
MF: It’s never a paycheck. I still can’t believe I get paid for doing something I love so much. I’d do it for free still. I know that sounds like a cliché that a lot of performers say. But at this point, I actually love doing it still. Every time I’m coming up to a new joke, I get a little excited … and it pays off. I’m still just in awe of it.

LEO: You dated comedian April Macie for a long time. Is it healthy to put the volatile personalities that come with being comics into one relationship?
MF: No. It’s incredibly unhealthy, and I don’t recommend it to anyone. April is a wonderful person, and she’s very talented. But two comedians are like putting oil and water together … they naturally repel each other. There’s a lot of jealousy that goes on, there’s a lot of competition. And female comedians, by and large, tend to be crazy.

LEO: What’s the worst gig ever?
MF: The worst gig ever was a Def Comedy Night at Caroline’s Comedy Club. They were doing the black Def Comedy Night. There was 350 people all there to see the Def Comedy show, and the owner saw I was there just observing and asked if I wanted to go on stage. I didn’t want to go on stage, which is exactly why I did it — I like to always do stuff that scares me. As soon as I got up there, they started booing me because I was white. They wouldn’t even listen to my show. I actually told them I wouldn’t leave the stage until they quit booing, and I stayed up there for 15 or 20 minutes. I could’ve gotten off after five, but I decided I was gonna stick through it to prove I could get through the worst situation ever. And I did, I got through it, and after they all quieted down and let me finish my act … I calmly walked off the stage and they actually applauded, so I think I won their respect.

LEO: That sounds almost as bad as The Apollo.
MF: I think it was a little worse … The Apollo has security, Caroline’s didn’t.