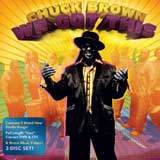 Go-go is said to be the only music native to Washington, D.C., a city where everyone is from somewhere else. Chuck Brown is the genre’s godfather, effectively creating it in the 1970s by combining percussive Latin grooves, jazz, gospel and rhythm-and-blues. The drum break to “Ashley’s Roach Clip” has been sampled to death by rappers from Eric B. & Rakim, LL Cool J and many others. On this three-disc audio and DVD collection, Brown tries to trap go-go’s energy. Soul songstress Jill Scott lends her talent to “Love”; two-time Grammy nom Ledisi pops up on the funk lasso “Funky Stuff.” The 22-song live companion disc is heavy on crowd participation, which is fine if you’re there. On stereo, it can become a tad stale after a few songs.