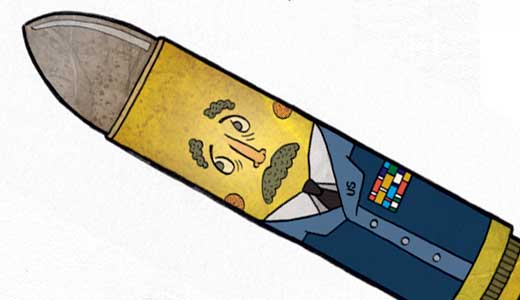 On Aug. 31, 2010, President Barack Obama announced to the world, “The American combat mission in Iraq has ended. Operation Iraqi Freedom is over, and the Iraqi people now have lead responsibility for the security of their country.”

This 18-minute, nationally televised speech officially marked the end of the war, an anti-climactic close to a violent conflict that has dragged on for seven and a half years.

During that time, nearly 1.5 million U.S. troops have served in Iraq, many returning for repeat tours of duty. More than 4,400 American troops have died in Iraq, and 32,000 soldiers have been injured. The estimated number of civilian casualties ranges from tens of thousands, conservatively, to well over 100,000.

The end of most wars in modern U.S. history can be associated with indelible images: the seaman kissing a nurse in Times Square and Japanese officials surrendering on an American ship at the close of World War II; American embassy workers in Vietnam hurriedly boarding helicopters following the fall of Saigon.

But in this instance, there are no such images.

Almost from the beginning, the war in Iraq has had to compete for media attention — with the ongoing war in Afghanistan, as well as domestic issues ranging from a recession to health care reform. Even in last week’s speech announcing the end of combat in Iraq, the president used the live address as an opportunity to discuss the economy and al-Qaida.

For much of America, the war in Iraq has been boiled down to a few blurbs on the evening news each week. Perhaps that’s because the reasons behind the United States’ involvement there were murky from the get go, starting with an invasion under the incorrect pretense that Saddam Hussein was stockpiling weapons of mass destruction. And despite the fact that 50,000 troops will remain on the ground there for the foreseeable future, the war will soon fade from this country’s consciousness.

But that’s not the case for two local soldiers and two Iraqis now living in Louisville who recently sat down with LEO Weekly to share their personal stories and differing opinions of the war.

Former U.S. Marine Josh White believes the public has largely overlooked the mission in Iraq, which he says, “defined my life for the best.”

“The only thing people care about is if they know somebody affected (by Iraq),” says White, a 27-year-old Southern Indiana native who now works as a call center manager.

Like a lot of his peers, White joined the U.S. Marine Corps shortly after watching the World Trade Center towers fall on Sept 11, 2001, a day that sparked a feeling of patriotism in him. After talking with a friend who had enlisted immediately following the attack, White signed up and was in boot camp come November.

In January 2003, White was sent to Camp Lejeune, N.C., for two weeks of intensive training to prepare for combat. By February, he was part of the massive American fighting force descending on Kuwait.

As was reported widely at the time, many American troops — White included — felt unprepared. He recalls that their Humvees were not armored; their flak jackets lacked the armor plating used to repel larger shrapnel and bullets; the fatigues they were issued were woodland green, perfect for fighting in a forest, not a desert.

The lack of preparedness affected morale, but as Marines, White says they did not complain.

“Did we have what we needed? It was enough because our training and skills were superior,” White says. “Normally, (the Marines) don’t have the best equipment. We’re just a bunch of mean bastards.”

The first weeks were the most difficult, particularly at night, when White says he was hunkered down in foxholes, “hoping nobody jumps in there and stabs you.” Sand storms brought the 1st Marine Division to a complete stop in hostile territory on more than one occasion, and there were ambushes that brought heavy fighting.

The one thought that continually occupied his mind: “Man, I just want to make it home.”

White’s unit made it to Baghdad, where he performed various duties after the initial invasion and before being deactivated. After serving one tour in Iraq, he remained in the reserves until 2009.

When asked how he feels about people criticizing the war, White says matter-of-factly, “Nobody likes to hear people talk bad about a war you fought in.”

“Americans like to see results quick,” he adds. “It took us 200 years to get established. (The Iraqis) are making hard changes. They had a dictator for 30 years, and it won’t happen overnight. But Iraq is a better place than it was in 2003.”

Watch enough news clips of the war in Iraq and you’ll see a lot of guys like Fred.

They are Iraqi citizens who serve U.S. forces as interpreters, guides and unofficial advisers, making day-to-day operations during the occupation possible. If the footage is from early in the war, they are generally dressed in civilian clothes and freely communicating with the locals. If it’s from later in the war, they are likely outfitted in a mixture of military and civilian gear that reflects their quasi-official status. They might also be covering their faces to protect their identities.

Now living in Louisville, Fred — a name given to him by coalition forces to protect his identity from insurgents — asked that we not print his real name. Although safely out of Iraq, he still fears for his life.

After the United States invaded Iraq, Fred and his young family moved to Baghdad to be near his wife’s relatives. Although well educated, he was unable to find employment, having previously spent years as a helicopter pilot in the agriculture industry, not exactly a lucrative line of work during wartime.

One afternoon in 2004, he noticed an argument between American troops and Iraqi civilians. Given he spoke fluent English, Fred stepped in to successfully mediate the misunderstanding. That same day, the soldiers — part of the 113th Armored Division — offered him a job as translator.

Believing he would be safe in the presence of U.S. soldiers, he accepted.

The Americans welcomed him, and soon he was sharing meals with them and riding in their Humvees. It was steady work that he enjoyed, but it soon proved dangerous. Fred recalls getting shot at frequently; he survived two RPG (rocket-propelled grenade) attacks and two-dozen IEDs (improvised explosive devices).

After a bomb in the Green Zone almost killed a fellow Iraqi interpreter, he quit working with the soldiers and searched for a safer stream of income to support his wife and children, but to no avail.

With no work and a lot of enemies as a result of his cooperation with the Americans, Fred applied for a special immigrant visa (SIV), a U.S. visa created especially for Iraqi nationals who assisted the troops and faced grave danger as a result.

On May 15, 2010, the visa application was approved and his family set out for the United States, ultimately landing in Louisville.

Although both he and his wife have found jobs — he at a fast-food restaurant, she at a big-box store — life has been difficult. Because his family lacks refugee status, they are not eligible for food stamps or other types of government assistance.

Despite having to relocate out of fear of retribution, Fred does not think his work for the U.S. government was in vain. At this point, he says his homeland cannot rely on the United States to fix what problems remain.

“This is the lesson Iraq needs to learn: If they never change their life, nobody can do that for you. Don’t trust something to come from overseas to know enough of Iraq to fix it. Iraq needs to drop in the water and swim.”

Ted joined the U.S. Air Force in 1999. A decorated sergeant, the Louisville resident spent three years in Iraq, experiencing both the initial stages of the conflict in 2003 and the chaotic civil war that followed.

Due to the sensitive nature of the work he performed while in the military, Ted signed a confidentiality agreement with the Air Force, which precludes him from speaking with the media. As a result, he has asked that we not use his full name.

“My personal opinion is that we should not have invaded Iraq,” Ted says. “Hindsight is always 20/20, and it was appropriate for what we knew at the time, but we should’ve taken more time. We should’ve identified specific threats. We were there before all (of the important) questions were asked.

In March 2003, then-President George W. Bush announced the United States would invade Iraq, citing the country’s possession of WMDs as the primary reason for going to war. No such weapons were ever found, but Saddam was captured in December of that year, and ultimately, the new U.S.-backed Iraqi government executed him for war crimes.

Meanwhile, insurgents in Iraq sparked a bloody civil war, which continued long after Bush prematurely declared “Mission Accomplished” from a U.S. aircraft carrier on May 1, 2003.

During his time in Iraq, Ted saw a country with deep wounds due to decades under the violent reign of Saddam, and there were a lot of scores to settle. Insurgents took advantage of the instability, and eventually al-Qaida became entrenched in the war-torn country.

American troops were caught in the middle, trying to fight a war while restoring order and reforming a country.

“We went in and made a war on terrorism and got involved with a civil war, which was not the reason we were there,” he says.

When Ted arrived in Iraq, he says, “They didn’t have prisons. They had slaughterhouses for the politically distasteful.” One of his first assignments was to help the Iraqis modernize their prison system.

That particular mission was a success.

Ted also recalls the day he observed a disagreement escalate between American contractors and Iraqi police. Both sides brought up their weapons, at which point he intervened and managed to defuse the situation.

As a result, he received a medal of commendation, a source of great pride.

Back home in Iraq, Ali was a journalist, heading a newspaper at a university in Baghdad. Prior to 2003, he spent most of his time covering issues related to higher education, a limited scope that helped him largely avoid being a target of Saddam’s censors.

While still living and working in Iraq as a journalist, he recalls how the local political council pressured him to write something more positive about the accomplishments of the new government and the coalition forces.

“I told them, ‘How can I write about something that doesn’t exist?’”

And while he was unpopular with the new Iraqi government, he eventually made enemies that were much more dangerous.

Journalism soon became a potentially lethal career choice, and he began receiving thinly veiled death threats from a local militia and al-Qaida operatives. Ultimately, he fled for safety in 2007.

After temporarily relocating to a neighboring country, Ali received refugee status and settled in Louisville. Like others interviewed for this story, he asked that we protect his identity.

When asked whether he believes the United States has been successful in his country, he says that if Iraq manages to get back to where it was in 2003 as far as infrastructure and safety, then that answer will be yes, because Saddam is no longer in power.

But as of now, the country has a long way to go, and in that sense, he says, “The last seven years have been a failure.”

He does not understand how a country like the United States — with the world’s strongest military — has failed to restore order in Iraq after all this time. “Nothing explains what has happened except America wanting to divide (Iraqis).”

This belief that U.S. forces have failed is exactly why Ali thinks President Obama has prematurely ended America’s combat mission. “The U.S. should put everything in the right direction (before leaving),” Ali says. “Don’t make chaos and then just leave.”