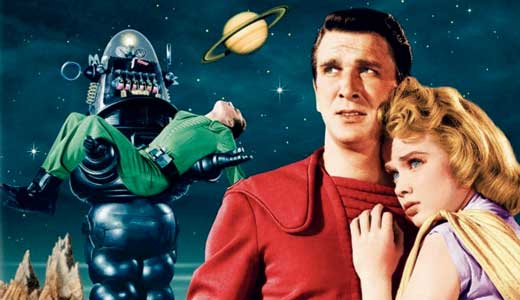 If ever there was a need to upgrade a great old film to Blu-ray, this was it. Now with brilliant, vibrant imagery and clear-as-a-bell “sonic tonalities,” we present the progenitor of “Star Trek” — and most every other space-opera made in the last 50 years. Leslie “Police Squad!” Nielsen stars as the heroic captain of a flying saucer full of oversexed space rangers who rescue Robby the Robot (who is obviously mechanical) and lovely Anne Francis (who is obviously not) from … something beyond. Includes Robby’s other screen appearances: “The Invisible Boy” (1957), and an episode of “The Thin Man” TV show. Recommended.

Now available for the first time on Blu-ray, the movie that made George Lucas’ career. What? You thought that was “Star Wars”? Nah. Here Robert Duvall plays the title character in a future Earth where people live underground, sex is outlawed and drugs are used to control the populace (sounds just like the LEO office). He stops taking his meds, gets Maggie McOmie pregnant, and they plan their escape with the help of SEN 5241 (Donald Pleasence). Watch for cameos by Sid Haig as NCH, Johnny Weissmuller Jr. as a chrome robot, and the voice of David Ogden Stiers. A simply fabulous movie, too rarely seen.

BY THE WILL OF GENGHIS KHAN

This Mongolian/Russian co-production tells the story of Temujin, who later changed his name to Chinghis Khan, founding the most ruthless empire in history (Wal-Mart). Part fact, part myth, it stars Sergei Egorov as Sam Walton, Cary-Hiroyuki Tagawa as Electronics Guy, and a host of others who bring in bascarts, etc. Breathtaking in scope and grandeur.

GOOSEBUMPS: THE BLOB THAT ATE EVERYONE

If you haven’t visited author R.L. Stine’s works lately, here’s a good chance to catch up. A trio of perfect funny/scary stories for kids including “My Hairiest Adventure,” “Piano Lessons Can Be Murder,” and the title tale.

A truly warped and inspired indie shocker filmed in Martha’s Vineyard. Years after an accident closes down the Advanced Parasitic Development project at an island lab, a beautiful female survivor returns with a bunch of drinking buddies to sell off the property. You might think you know where this is heading, “butt” you’d be wrong (har har). A.k.a. “Parasite Queen.”

Point One: This movie isn’t as bad as you’ve heard. Point Two: Yes it is. The Bottom Line: This is silly, sexy, mindless entertainment featuring a pair of attractive comics having a good time. Ashton Kutcher is completely unbelievable as the super-assassin who charms his way between the legs of heavenly Katherine Heigl, but no one’s complaining. They should have stopped the movie right there, but it meanders into married life à la “True Lies” and slows down. But who cares? As long as Katy’s on the screen, it can run forever. Fun.

Doctors now prescribe laughter instead of drugs: It heals the body, the mind and the soul. No joke. This wonderful doc takes us on a journey millions of years into the past and far into the future to learn all about the laughter of history, death, torture and insanity. Free to anyone, and highly contagious, laughter might even help us survive Mitch McConnell.

This one-joke SNL outing, based on Will Forte’s running “MacGyver” gag, isn’t the worst SNL movie ever made, but it won’t win any awards, either. A silly, fun movie greatly enlivened by Kristen Wiig as Vicki St. Elmo and Val Kilmer as Dieter Von Cunth. With Ryan Phillippe and Powers Boothe. Goes great with cheap beer and an old couch.

The latest release of this too-cute-to-believe series about the lives, loves, heartaches and terrors of a group of African meerkats, any one of which is more appealing than Snooki.

Ryan Carnes (Justin from “Desperate Housewives,” Cody from “Trailer Park of Terror”) stars as The Ghost Who Walks in this updated SyFy version of the old Lee Falk comic. Supposed to be the pilot for a new series, but we haven’t heard if anyone’s shelled out the bucks yet. Kinda fun.

Dame Helen Mirren is all over the screen today, what with “The Queen” and “Elizabeth I” (or catch her naked and on top in 1980’s “Hussy”). But the old babe’s been turning in great performances for decades now, such as this nine-disc offering of veddy, veddy British Detective Chief Inspector Jane Tennison mysteries. A total of nine absolutely riveting, full-length tales, plus lots of great bonus goodies. Some of the best TV you’ll ever see.

Every time one of these incredible stop-motion kid-vid shorts-compilations hits the market, we tell everyone to run out and buy it. But do you listen? No, you fart around your house, wasting your life watching reality TV when all your friends are enriching their souls, farting around their houses watching “Shaun the Sheep.” Get off your hindquarters and hie thee to a videory! It’s “Shaun the Sheep”!

The LAPD decides to hold a training exercise, a “robbery drill.” Problem is, the four morons they hired as “robbers” don’t know that — and end up kidnapping an innocent bystander. Produced, directed, filmed, edited, designed, costumed, cast, decorated and stunts by Spicy Mac. One crazy-ass movie.

THE NORM SHOW: THE COMPLETE SERIES

From Bruce Helford, the same guy who brought us the late, lamented “Drew Carey Show,” this Norm MacDonald vehicle was a minor hit on Wednesday nights, with Norm’s abrasive, self-centered — even brutal — humor providing some of the best belly-laughs on TV. Then ABC, which prefers its humor a little less funny, dumped it to Friday night in order to kill it. Still, we got three good seasons before the axe fell, and they’re all here, plus a terrific behind-the-scenes booklet written by Helford and MacDonald that’s worth the price of admission.

Two lonely people — a beautiful woman who prostitutes herself to support her daughter and ailing mother, and a widowed photographer — share a strange intimacy in this haunting tale from Indonesia. Recommended.