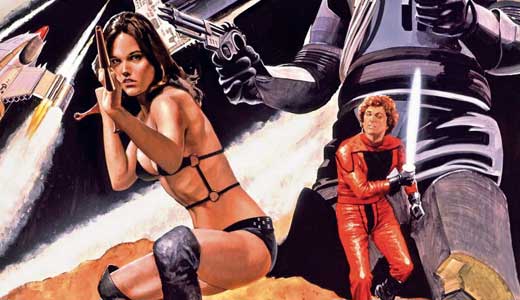 Oh, wow! Now on Blu-ray, this great drive-in shocker from back in the day. Ken Norton plays a noble slave sold into plantation life, where his new owner, Perry King, intends to turn him into a boxer. But Perry is busy siring “suckers” upon all the attractive slave women, while his wife, lovely Susan George, goes without. That is, until she spots ebony Adonis Norton and decides that what’s good for the gander is good for the hot blonde chick. When King finds out, of course, he is shocked that his wife would touch a black man, and he kills Norton in a truly horrible climax. Mandingo Enraged both blacks and whites, who picketed the theaters, thus guaranteeing brisk ticket sales.

First Blu-ray release of producer Roger Corman’s terrific cheesecake Italian-space-opera rip-off. Gorgeous Caroline Munro as “Stella Star” spends much of the movie in a bondage-bikini/bra-and-panties outfit that set the standard for cheesy pulchritude for more than a decade. With David Hasselhoff, Christopher Plummer and Marjoe Gortner, Munro does battle with the evil Zarth Arn (Joe Spinell) and some of the absolute worst dialog ever conceived! The ultimate so-bad-it’s-good movie, now complete with a truly wondrous array of bonus goodies. Our absolute highest recommendation.

CASINO JACK AND THE UNITED STATES OF MONEY

If you liked “Enron: The Smartest Guys in the Room” or “Gonzo,” about local boy Hunter S. Thompson, you’ll love this bio-doc on GOP poster-boy/lobbyist Jack Abramoff. It starts off with the murder of one of his associates, then gives us the back story of his college days with the likes of Karl Rove, Ralph Reed and Ronny Reagan, leading us through money laundering and gun sales to crazy despots and other GOP fundraising exercises that are now de rigueur. Excellent.

If you haven’t checked out this solid anime series, here’s your chance. Makina is dead. So are lots of people who are still walking around, and most of them are up to no good. But she’s got a pair of MAC-11 machine guns to help fill all those empty graves, and a purpose in (un)life: to make the world safe again for the living. Cool.

Jimi died 40 years ago this month. What better way to remember him than this doc that focuses on the man’s music. Originally a backup guitarist for Little Richard, Jimi simply found ways to express himself with the guitar that no one had ever imagined before, and it forever changed the way music was made. With insights by Eric Clapton and Ginger Baker of Cream, the vastly underrated Dave Mason, Mick Taylor of The Rolling Stones, Paul Rodgers and others.

If you can buy the idea of Queen Latifah as a physical therapist, the rest of this romantic dramedy is kabuki. She carries the movie with surprising grace, helping Common overcome his injuries while plumbing the depths of family problems and coming to terms with back-stabbing friends. Co-stars Paula Patton, Phylicia Rashad and Pam Grier.

Help! We’re drowning in estrogen! Apparently, crazy women throughout history have been tucking letters to Shakespeare’s Juliet into a wall, hoping the fictional character will write back with advice. Uh-huh. One of these notes falls into the hands of uber-romantic Amanda Seyfried, who seeks out the author (Vanessa Redgrave) to send her on a half-century-cold trail for the “one who got away.” If a guy did that, it would be called “stalking.”

MY SON, MY SON, WHAT HAVE YE DONE

Lots of big names behind this surreal “whydunit” make it a real guilty — if completely messed-up — pleasure. David Lynch produced; Werner Herzog directs; Willem Dafoe, Grace Zabriskie, Michael Peña, Chloé Sevigny, Brad Dourif, Michael Shannon and Udo Kier act in a sorta-true tale of an actor who kills his mother to “get into” a part. Bizarre, from the masters of bizarre.

PRINCE OF PERSIA: THE SANDS OF TIME

Jake Gyllenhaal is having an absolute ball in this overblown vid-gamer done right. Gemma Arterton is a bit too reserved for our tastes, but she uses her beautiful face to its best advantage, constantly hoodwinking Jake out of a magical dagger that can save the world — or destroy it. Disney Corp. Inc. dreams of this being their next big cash-cow, à la “Pirates,” and we hope they succeed. With oily Ben Kingsley, a hilarious Alfred Molina and Steve Toussaint.

WHO IS CLARK ROCKEFELLER?

This is damn good, made even more so when you consider it came from Lifetime, one of the most dismal places on the tube. It tells the true story of con-artist Christian Karl Gerhartsreiter (Eric “Will & Grace” McCormack), who came to America in the late ’70s, working his way into Boston high society through a series of scams. They culminated in his adopting the name “Clark Rockefeller,” the supposed heir to the got-Rocks fortune, and marrying a millionairess. But it all fell apart over the love of his daughter. Good stuff.