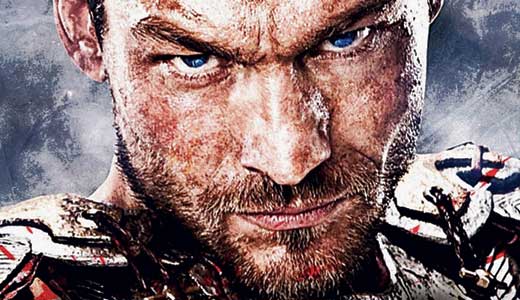 This big-budget cable-TV series from Starz has everything that makes American cable TV great: tits. Lots and lots of tits. And fighting. And brutality. Blood — got to have blood. And sand. Well, you get the idea. There’s WAAAAY too much plot to all of this, but each new episode provides a new pair of plumpers to peek at, and that’s all anyone cares about, anyway. A four-disc set with all 13 episodes — some 26 tits in total — and the Blu-ray version has additional footage, but no more tits; we checked. Hey, it’s our job.

A pair of giant radioactive turtle double-features in which Gamera battles Guiron (a Ginsu knife-nosed monster), Jiger (who injects him with parasites, requiring a “Fantastic Voyage”-like rescue), Gyaos (a giant bat) and Viras (a giant squid). Man, do we love crap like this!

HOWARD ZINN: YOU CAN’T BE NEUTRAL ON A MOVING TRAIN

One of America’s most cherished citizens — intellectual, historian, author, playwright, socialist, activist, anarchist and all-around rabble-rouser — Howard Zinn died in January 2010. This is a special edition re-release of the 2004 bio-doc based on his memoir of the same name. If you give a damn about war, civil rights, the abuse of power or any other battleground for the soul of man and you don’t know Zinn, you should take this opportunity to up your education.

One of the stupidest, most entertaining shows on TV. Mark Valley plays the mysterious square-jawed protector-for-hire, Christopher Chance, who is aided by his boss, Chi McBride, and criminal genius Jackie Earle Haley. Great cast, beautiful women, exotic locales and One Big Stunt every episode — what’s not to like? Twelve episodes on three discs, plus a gag reel and other goodies.

JOSEPH CAMPBELL AND THE POWER OF MYTH, WITH BILL MOYERS

Imagine the two most intelligent men who ever lived, men whose very words could change your life forever. Now imagine they are sitting together, talking. Just talking. About whatever comes into their heads. Now imagine that you find yourself scarcely breathing, lest you miss a single word. That’s exactly what happened to us the first time we watched this. And the second. And the 12th. Highly recommended.

Ed “Al Bundy” O’Neill, Ty Burrell, Julie Bowen and Sofía Vergara star in this seriously demented series from Fox about a trio of “average” families — a gay couple, a cul-de-sac stereotype and an American man with a Colombian wife and son. Similar in spirit to “The Office” (the good British version, not the crappy American one), it has a made-up-as-we-go documentary feel and co-stars the amazing Sarah Hyland from “Lipstick Jungle.”

Colin Farrell stars as a down-on-his-luck Irish fisherman who catches beautiful Polish actress Alicja Bachleda in his net — lucky bastard! His sickly daughter (Alison Barry) declares her to be a “selkie,” a magical being that can grant wishes, and the woman plays along. But it all turns dark as the girl’s condition worsens, and the woman’s sordid past comes to light. Definitely not your average movie, “Ondine” skirts between would-be fantasy and harsh reality in a way we’ve never seen. Simply wonderful.

While we prefer Errol Flynn, this Ridley Scott version stars the always great Russell Crowe, with Cate Blanchett as his Marion. This is a far darker, more grizzled tale of court intrigue than we’re used to, sort of a “prequel” (if there can be such a thing to a tale that is 99-percent fiction) to most Hoods, but Crowe pulls it off in his usual tired-but-unbowed style. Co-stars William Hurt, Mark Strong, Danny Huston and Max von Sydow.

More noisy, stomp-dancing nonsense starring a bunch of people we never heard of.

Adrien Brody and Forest Whitaker star in this update of the famous German film of the same name, about a true psychological experiment from the 1970s that went horribly wrong. Volunteers were randomly divided into prisoners and guards and asked to live their roles for a month, while unseen scientists watch to study the “group dynamics.” What happened next was chilling — a startling journey into the inhumanity of the human animal.

This British kid-flick, shot in Hungary, weaves a dark tale as Dakota Blue Richards finds herself alone after the death of her father. Her only inheritance: a mysterious home that she must share with an eccentric uncle and, apparently, a magical world full of mythical creatures. Co-stars Juliet Stevenson, Tim Curry, Natascha McElhone and Ioan Gruffudd.

A surprisingly good tale, the third in the franchise (if we’re counting correctly), courtesy of Disney’s British arm. We’re not big fans of its “2-D digital that looks like 3-D” animation, but that’s just us. Provides a much-needed “backstory” into the life of Uncle Walt’s least-appreciated creation. The wee ones will love it.