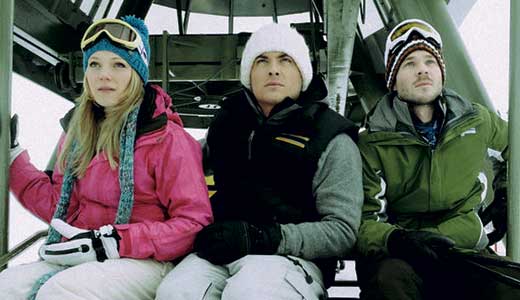 By now, everyone’s had a chance to check this out on the Internet — if not the theater — thanks to its viral ads. Kevin Zegers, Shawn Ashmore and Emma Bell try to cut corners at a ski resort and end up being trapped on a shut-down ski lift over a three-day weekend, 60 feet from the ground. Then, when the temperature drops and the wind picks up, a pack of wolves begins howling in the snow below. But what turns this no-budget gimmick into a truly terrifying ordeal is the excellent performances by all three — particularly Bell. Not to be missed.

While it couldn’t match the impact of the first “Iron Man,” this one has one thing the other didn’t: Mickey Rourke. This time, Robert Downey Jr. finds himself imperiled by toxic metals leaching from the life-giving power plant in his chest while Russian scientist Rourke duplicates his super-tech to create a lightning-powered bullwhip and his own super-suit. Meanwhile, Don Cheadle also gets a super-suit, and lots of cool action takes place while Gwyneth Paltrow and Scarlett Johansson strut around looking good.

This absolutely brilliant, if lightweight, doc follows four babies from four corners of the world — San Francisco, Mongolia, Namibia and Tokyo — during their first year of life. No narrator, no gimmicks, no script — just four little homo sapiens, born equal and perfect, learning what it means to be human in their particular situation.

Cool! We loved these back when they were first broadcast in ’75-76. Jim Hutton stars as the titular sleuth, presenting each mystery in such a way that you, the viewer, have all the clues needed to solve the crime. He would recap just before the last commercial, then come back with the unmasking. Did you solve the mystery? Great stuff with David Wayne and Barbara Rush.

Never shown on broadcast TV, this episode finds Lois agreeing to be the surrogate mother for an infertile couple — and Peter is not happy about it! The jokes stretch from here to maternity. (We stole that.) Also features “The Seth and Alex Almost Live Comedy Show,” “Family Guy: Live and Uncensored Table Read” and nine original songs composed for the show.

The amazing true story of Joseph Pujol and Dr. Marcel Baudouin. The former was an entertainer at the Moulin Rouge who could imitate any sound using only his anus. The latter was a well-to-do researcher who lost everything in a fanatical pursuit to understand Pujol’s “talent.” Originally a French short titled “Le petomane: Parti avec le vent,” this somehow became a National Lampoon title when it crossed the ocean. Stars Ben Wise, Kevin Scott Allen and Aimee Miles.

GET HIM TO THE GREEK

In a spin-off of “Forgetting Sarah Marshall,” Russell Brand returns as the obnoxious, drunken rock star who has now hit the skids in London. Enter Jonah Hill, a dim-witted record-company lackie whose career rests on fulfilling one simple task: getting Brand to L.A. in time for a comeback show. Should have been a comic dream, but shows signs of being rushed into production without a solid script. A few laughs, nothing more.

The character of Leopold “Butters” Stotch didn’t really take off until about the sixth season, in the episode “Two Guys Naked in a Hot Tub.” Since then, he has become iconic, especially when Cartman needs someone to torture. This two-disc set features almost five hours of of Butters’ best — and some of the greatest collectible bonus nonsense we’ve ever seen! Recommended.

THE KILLER INSIDE ME

Nice little indie chiller with the cast of the gods. Casey Affleck plays a small-town sheriff who uses murder to simplify his job, with help from Jessica Alba, Kate Hudson, Simon Baker and Bill Pullman.

WILLI TOBLER & THE DECLINE OF THE 6TH FLEET

A classic example of sci-fi used to explore the ills of society from the masters of the technique: the New German Cinema movement. During a galactic war, a man walks out on his life, wife and kids, seeking security in high places as the PR man for the exalted Chief Admiral. But freedom and security are never compatible. In German, with subtitles.