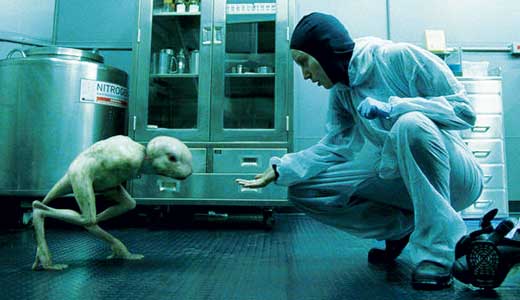 Adrien Brody and Sarah Polley star in this “Species”-like sci-fi shocker as a pair of too-smart scientists who create a human-something hybrid with a stinger in its tail. It grows fast and turns into sexy Delphine Chanéac before anyone thinks to consider the fascinating cinematic implications of man literally taking control of his own physical evolution. Silly, shallow, and bloody good fun.

Notice: If you haven’t heard about this flick and you want to keep your lunch down, skip this review. OK, don’t say we didn’t warn you! Insane Dutch director Tom Six spews forth the most gut-wrenching, nauseating, lights-on horror we ever saw, sending a mad doctor to sew together three people — in a line, mouth to anus — to create the writhing title monstrosity. And, yes, we actually puked … when we heard a sequel is in the works!

A NIGHTMARE ON ELM STREET

Wes Craven’s 1985 original is an out-and-out horror classic, and launched the careers of Johnny Depp and (to a much lesser extent) Heather Langenkamp. And 25 years later, it’s still an imaginative, slick, first-rate shocker. So why remake it? Because producer Michael Bay got the money and access to Jackie Earle Haley, that’s why. Is it any good? Were Bay’s remakes of “The Texas Chainsaw Massacre” and “Friday the 13th” any good? You decide. Five teenage friends dream about a creepy guy (Mitch McConnell) who can kill them in their sleep.

This follow-up to Burns’ groundbreaking “Baseball” doc looks at how America — and the world — moved through the millennial years. With more Asian and Latino players arriving, the game and the country changed, with battles over money and drugs turning a once simple sport into a multi-billion-dollar juggernaut.

The first combined Blu-ray release of Quentin Tarantino/Robert Rodriguez’s groundbreaking two-part homage to the bygone days of the corner moviehouse. Includes both the exquisite homage to zombie movies, “Planet Terror,” and its lesser companion piece, the brutal mad-driver flick “Death Proof,” plus hours of terrific bonus goodies from Rodriguez and SFX master Greg Nicotero, the extended trailer of “Werewolf Woman of the SS,” and some truly demented making-of goodies. Sweet.

PENGUINS OF MADAGASCAR: I WAS A PENGUIN ZOMBIE

Those flightless fowl are at it again, this time battling the undead, killer robots, mad scientists and a handful of other high-spirited Halloween howlies. Eight episodes in all from the TV series, including one never before seen.

There have been nearly a dozen episodes in this, Sesame Street’s new Jewish boulevard, introducing pre-schoolers to a different culture than they might see at home. In this one, Anneliese loses her special menorah in a game of tag with a chicken. Could we make that up?

Jaden Smith holds his own pretty well under the eye of star Jackie “Mr. Miyagi” Chan in this remake of a perennial ’80s favorite. Now set in China, Smith is seriously outgunned by gangs and bullies raised on centuries of martial arts tradition, getting his clock cleaned repeatedly until Chan teaches him to stop fighting and start thinking. We generally abhor remakes, but this one doesn’t suck.

THE SECRET OF KELLS

OK, we admit it — 99 percent of everything we write is pure bullcrap. We get big bucks and lots of subdeb hoochie to push these shitty movies. But this is different: a lyrical and thoroughly transporting animated film — done old-school, by hand — in which humble Irish villagers stand against merciless Viking raiders while silver-winged fairies and innocent children invoke Celtic mysticism to preserve the soul of a civilization. Lots of celebrity voices, but who really cares? This is what movies are supposed to be. Buy it, please.

Roger Corman’s finest dreck from his mad-slasher/nudie period. Do we really need to say more? This trio of driller-killer-thrillers (with occasional comedy and — we swear to God! — musical numbers) founded the careers of such lingerie vets as Michelle Michaels, Hope Marie Carlton, Maria Ford and Crystal “Wings” Bernard (who doesn’t show ’em). With cameos by Brinke Stevens and many other scream-queens of the ’80s. Recommended.

Yes! The legendary so-bad-it’s-good flick, considered by many to be the single worst movie ever made, and inspiration for the doc “Best Worst Movie.” And it’s available on Blu-ray, no less! Trust us, just go buy this thing and throw a party — but make sure you wait for “Best Worst Movie,” which arrives on DVD on Nov. 16. Cinema as it was meant to be: clueless.

First video release of Comedy Central’s sublime animated horro-comedy series where every imaginary monster, freak and what’s-it from aliens to zombies try to survive in the Big Apple alongside the rest of us. We’ve been to New York, and, frankly, it’s not that big a stretch. Highly addictive.

Fans of “Zombieland” will recognize this title from that DVD’s bonus goodies, which included the first episode of this wonderfully goofy “Shaun of the Dead”-like horro-comedy series from the Crackle online network. Jon Heder stars as a confused guy who drowns in his bathtub and wakes up undead. Why? He hasn’t got a clue, and his friends, including Josh Gad and Krysten Ritter, aren’t any help at all, which only adds to the fun. Seriously twisted.