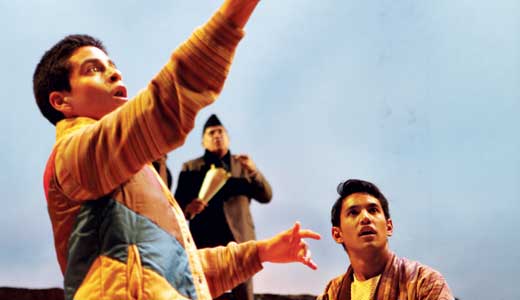 The Kite Runner
A production by Actors Theatre of Louisville. Directed by Marc Masterson. Continues through Sept. 25. Go to www.actorstheatre.org or call 584-1205 for information and tickets.

Amir, the central figure in Matthew Spangler’s dramatic adaptation of Khaled Hosseini’s novel “The Kite Runner,” is no hero. A child of wealth and privilege, he comes of age in an Afghanistan where class, ethnicity and parentage are the facts that determine fate. And for the young Amir, his inherited status forms a fragile shield that barely protects him from a culture that protects him from everything he is not. His world values physical strength and courage; he possesses neither. His father cares not a whit for bookish, intellectual prowess or for the imaginative charms of storytelling; these are Amir’s strengths. In a culture where honor, loyalty, friendship and integrity are as valuable as life itself, the young Amir is self-centered and so morally weak that his life is defined by a chain of tragic choices that will haunt him throughout his life. Even as an adult, when given the opportunity to do the right things, he’s a reluctant, resentful figure who is ultimately driven by others down a path of redemption.

And yet, in telling his own story, Amir is as courageous and candid a narrator as can be imagined. And in director Marc Masterson’s staging of “The Kite Runner,” which is having its second professional production this month in the Pamela Brown Auditorium at Actors Theatre, Amir’s story takes on a grave majesty that evokes ancient archetypes, like Cain and Abel, Gilgamesh and Enkidu.

The play’s complex story is, literally, narrated by the adult Amir (Jos Viramontes). As his life plays out on the stage, he observes, explains, comments, steps in and out of the action (when it involves his adulthood), judges, excuses and reacts — sometimes with deep pleasure, sometimes with horror and grief. It’s a demanding task, serving as an omniscient judge looking back on the ghosts of one’s past, and Viramontes’ superb pace, understated urgency and fluid expressiveness build a taut emotional arc that compensates for a script that occasionally yields to tangent, caricature and melodrama.

Masterson has honed his ensemble — many in multiple roles — to a sharp state of readiness. The younger actors — Jose Peru Flores (the young Amir), Matt Pascua (Hassan/Sohrab), Zarif Kabier Sadiqi (Assef) — capture among them all the states of youth, glee, tenderness, humor and cruelty (chilling, sociopathic cruelty, in the case of Assef). The adult male figures in young Amir’s life — his father (Nasser Faris), Rahim Khan (Apollo Dukakis), Ali (James Saba) — are compelling in their dignity, gravitas and compassion. And when wit, anger, romance, sinister accomplices or comic relief are called for, the rest of the cast (Aadya Bedi, Ariya Ghahramani, Omar Koury, Kario Pereira-Bailey, Annie Pesch, and Remi Sandri) are masterfully adept.

But the sensual and visual power of this production emanates from lighting (Brian J. Lilienthal), sound (Matt Callahan), scenery (Michael B. Raiford), costumes (Lorraine Venberg), music (exquisite tabla playing by Salar Nader) and Masterson’s brilliantly composed human tableaus. In scene after scene, Masterson doesn’t merely block the action. Rather, he creates sculpted images — sometimes static, sometimes in fluid motion — that are as moving and evocative as anything that’s being said by the characters. And in one extraordinary scene — the climactic kite race in Kabul — he employs rhythms of the tabla, claps and cries of the street, and raw power of imagination to create a genuine theater of the mind. That is heroic.