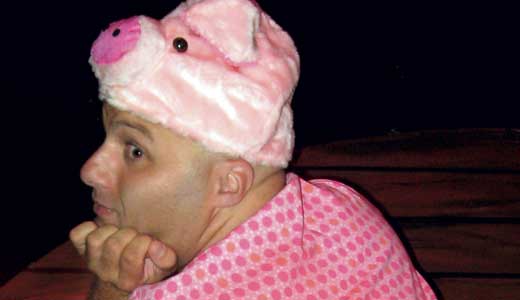 When Pigs Fly
A production by Pandora Productions. Directed by Michael J. Drury. Continues through Sept. 12 at the Victor Jory Theatre at Actors Theatre, 316 W. Main St. Go to www.pandoraprods.org or call 216-5502 for information and tickets.

Pandora Productions opens their 2010-2011 season with a show about following your dreams, no matter how absurd. It’s a show about being way too big, way too out there, and risking complete failure. And they do it beautifully.

The play opens with a young man, Howard, telling his guidance counselor of his love of theater and desire to put on a show. She tells him he could only be a success in theater “when pigs fly.” So Howard sets out to prove her wrong, though her prediction continues to haunt him and makes him question his dream. Mark Waldrop wrote the hilarious sketches and lyrics, with music by Dick Gallagher, in this show conceived by Howard Crabtree and Waldrop.

The show really begins once the entire cast is onstage for the first number, “When Pigs Fly.” Their voices fill the room, and the audience gets a taste of the humor and harmonies of the talented cast, which includes Patrick Brophy, Zachary Burrell, Jason Cooper, Alex Craig and Ben Gierhart. Craig and Cooper soar in their solo numbers, while the others lack a bit of the boldness in voice and attitude (I think the assistance of body mics would help pop the vocals and fill the space). Craig and Cooper both demand attention while looking confident onstage — in drag, heels and tights, all while singing and dancing. And Cooper is, in a word, hilarious. In the “Coming Attractions” numbers, I, along with the rest of the audience, had a hard time catching my breath from laughing so hard. Something about his presence onstage lights up the audience with anticipation.

It’s clear from Michael J. Drury’s direction that he is well aware of the talents of his cast and crew and uses them to the fullest. He keeps the momentum going and lets each number shine. And the entire show — from lights to props — feels integrated. Drury has honed one tight production. Christephor Gilbert’s choreography never slips into self-awareness but continues to be both subtle and interesting. And Gayle King, the musical director, sits at the piano and accompanies the show. Her presence is felt, with some great comic timing with a silent nod here and there, but her real talent is obvious in the soundtrack.

And, oh, those costumes. It isn’t simply that Donna Lawrence-Downs created epic pieces for this production — it’s that she created way too many to count or even comprehend. The detail work is impeccable — the textures, beads, fabrics and patterns shift and change to make each its own inspiration, while staying consistent with the entire production. How many times do you see a play where a costume gets applause in the middle of the show? It happened here, and Lawrence-Downs deserves every accolade.

Pandora has billed “When Pigs Fly” as a side-splitting musical and costume extravaganza. That is an accurate way to sum it up. Hurry to get your tickets, because when word gets out that this is the funniest musical to come to town in a while, you might only get a ticket when pigs fly.